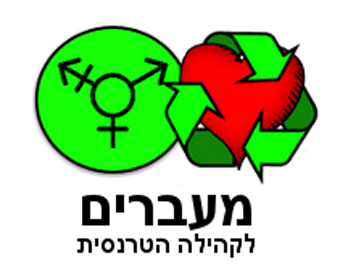 Ma’avarim for the Trans community, is an organization that was established with the goal to empower and support members of the trans community, facilitating both personal and social change. Using an innovative approach to trauma within marginalized communities, and burnout among activists, “Ma’avarim” aims to bring about positive change in our society, our communities, and in the life of each and every one of us.

The organization’s work includes promoting the accessibility of knowledge, resources, and innovative tools for coping; working with legislators on policy change; economic empowerment, emotional support, and personal contact with members of the trans community; providing support with paperwork and bureaucracy; assistance with institutions; and cultivating trans youth leadership.

“Maavarim” organization takes a groundbreaking approach dealing with gender oppression, which includes a combination between sustainable activism and healing from trauma.

While Israel boasts itself as LGBT friendly, the reality of trans and gender variant people in Israel is similar to that of the gay community 30 years ago. Transgender people are ridiculed in the media, cast out by their communities and families, many are marginalized towards poverty and sex work.

There is barely any legal protection against discrimination. While there have been cases where judges have interpreted anti-discrimination laws on the bases of gender to include also gender identity, only in 2014 the first and only law protecting from discrimination based on gender identity has passed, protecting transgender and gender variant pupils at schools (the amendment to the Pupil Rights law). Today our protection is dependent on the mercy of a judge rather than by law.

Lack of knowledge regarding the trans community, of healthcare providers, in schools and the education system welfare, policing, social services, and more render these services discriminatory, inaccessible and sometimes even violent.
In addition, all state services that are divided by gender are inaccessible to trans people, for example, homeless trans women are expected to enter shelters for men. These services include programs for risk reduction for sexworkers, religious services, hostels for youth at risk, and even public restrooms.

Changing gender listed in the registrar

Currently, transgender people whose appearance does not match the information which is listed in the registry, are exposed to discrimination and violence – from conservative employers, homophobic landlords, and while traveling abroad to countries hostile to the LGBT community. The details that appear in the passport and other official documents, must match the gender of those who own them.

Despite an appeal to the court as of today in order to change the gender marker, transgender persons are required to undergo Gender Reassignment Surgery, including sterilization, which violates reproduction rights. In addition the gender marker appears in the Israeli ID card, gender variant people and trans people who are forced to live under two identities at risk. These are high-risk populations within the trans community: young transgender people who live with their non accepting parents under the sex they were assigned at birth, but outside the house are beginning to live under their new identity, divorced transgender people whose former spouses do not accept and demand that they do not visit the children under their new identity, and transgender people from religious and conservative communities that may only visit their community under their previous identity. The Israeli ID card – as the Israeli driver license, needs no mention of sex.

While in 2014 the policy for gender reassignment has changed for the better, we are still working in order to improve access to surgeries, hormones and other treatments which allow trans people to live their full identity.

One of the biggest problems to facilitate change for the transgender community is the lack of funding, organizing and building leadership from within the trans community. This is a worldwide challenge.
While today many LGBT organizations have added the T to their name and some have even started providing services that are trans-friendly, in reality there are very few trans people in leadership positions, if any at all, there is lack of knowledge on the subject of trans. There is a need to educate the bigger LGBT organizations on trans issues, and help fund independent Trans organizations as well.

Through cooperation with the Israeli Minister of Health, officials in the ministry, and contact with the National SRS committee, Ma’avarim took part in the initiative of 2014 to update and promote higher standards of accessible trans health, as specified in the World Professional Association for Transgender Health Standards of Care 7.

We work together with all political parties, left and right, in order to promote legislation supporting trans rights. Ma’avarim has worked closely during with members of parliament and LGBT activists within the parties to promote raise awareness to trans issues, in parliament committees and political conventions, we also encourage trans people to be more active in the political scene, and voice the needs for trans rights. While Gay rights are widely discussed, many politicians are unaware of the issues trans people face daily.

Ma’avarim assisted the Equal Employment Commission of the Ministry of Economics in a groundbreaking surveys of LGBT employees proving that trans workers face high rates of discrimination at the workplace. We organized a workshop with the Commission informing trans people of their rights as workers, we organized a day-long seminar for employers on how to include trans workers within their workforce.

Together with the National Insurance Institute of Israel, we work to make disability pensions more accessible to trans people who have trouble integrating into the employment market during their transition.

Youth Leadership: The Next Generation

Leadership group for trans, genderqueer, gender variant and questioning youth ages 14 till 18. This is where we are cultivating the next generation of trans leaders. The group provides support, empowerment, and social opportunities to interact with peers through activism. We meet once a week in Tel-Aviv, but the group is intended for the periphery as well, we provide bus fair for those who need it

Empowerment for Trans Women and Girls: “A voice of your own”

Vocal expression, like gender expression, is a spectrum. Voices can have male or female characteristics, some physical, some behavioral, Finding your own voice is a complex issue for trans women, in more ways than one. While voice training can help trans women “pass” as women and can help them avoid exposure to violence and discrimination, it can also boost their confidence and encourage them to speak up for themselves. Our bi-weekly meetings include a voice training workshop, but also as a safe space to be heard, empowered, meet and socialize with other trans women in different stages of the process. The workshop is led by a professional speech therapist who has been working with trans women since 2010.

Ma’avarim’s hotline and welcoming service provide information and emotional support for a wide range of individuals, including those questioning their gender identity, as well as for the entire transgender spectrum, and also for family, friends, and healthcare providers.
We provide information regarding hormone therapy, official name and gender marker change, funding surgeries, national security pension claims, referrals to friendly doctors and therapists. We help in dealing with the bureaucracy of the SRS committee, the army, and other official institutions, helping to make the process accessible to all. Information and support is provided without charge, in personal meetings, or contact via email, facebook, whatsapp, or by phone.
Our volunteers provide the service in Hebrew, English, Arabic, and Russian.

A unique program which is a collaboration between the Tel Aviv Gay Center and Municipality and the National Insurance Institute for trans, gender variant, and questioning youth ages 16 till 20 who have either left school due to transphobia, or have difficulty entering the workforce. We provide a safe and supportive space to allow the completion of studies; we also arrange workshops, and professional training towards employment, building employment skills.

Many trans and gender variant people suffer from harassment and violence.  In addition to our constant work on making Israeli society more accepting and tolerant towards transgender people, it’s important to give trans people tools to deal with the current reality. The course is not only about protecting yourself from physical or sexual assault, but also deals with self-confidence. The goal is that everyone understands their rights, protecting their bodies and minds, how to recognize situations of exploitation. We also pay attention in the course to dealing with verbal and emotional abuse, because a lot of harassment that transgender people experience in general is verbal. We teach how to deal with verbal harassment. The course is a collaboration with El Ha’Lev NGO and is led by a licensed instructor from El Ha’Lev, who has been practicing martial arts since 1983.

While there is a dire need for advocacy work on behalf of the transgender community, currently very few trans people have the resilience to do this work. “Transformations” is a unique short-term empowerment and support group, assisting trans and gender variant people to deal with transphobia and heal from the insidious trauma that occurs due to long-term exposure to gender oppression. Our groups provide various tools to deal with difficult situations that include transphobic remarks, build the confidence needed in order to speak in front of an audience or on camera, and the resilience needed to deal with day to day situations, on the workforce, at school, and with our families. We aim to provide a toolkit of methods that will assist trans and gender variant people today change the reality of tomorrow, either through activism, volunteer work, or just through engaging complex situations in everyday life. The bi-weekly meetings are led by a trans activist and a professional group facilitator, and various workshops and lectures are provided by external professionals on different subjects.
The program is in collaboration with Hoshen organization, the LGBT organization for Education and Change.

The trans community faces, high risk of suicide (%41 have attempted suicide at least once), this is especially apparent during the weekends and holidays when others are home with their families, many community members feel more alone than ever. We provide community events such as Second Hand Baza’ar where trans people can find and exchange clothes in a safe space, and various other community events. This is a place for trans youth who have been kicked out of their family house, and the older generation who feel lonely on the Sabbath – to feel togetherness. 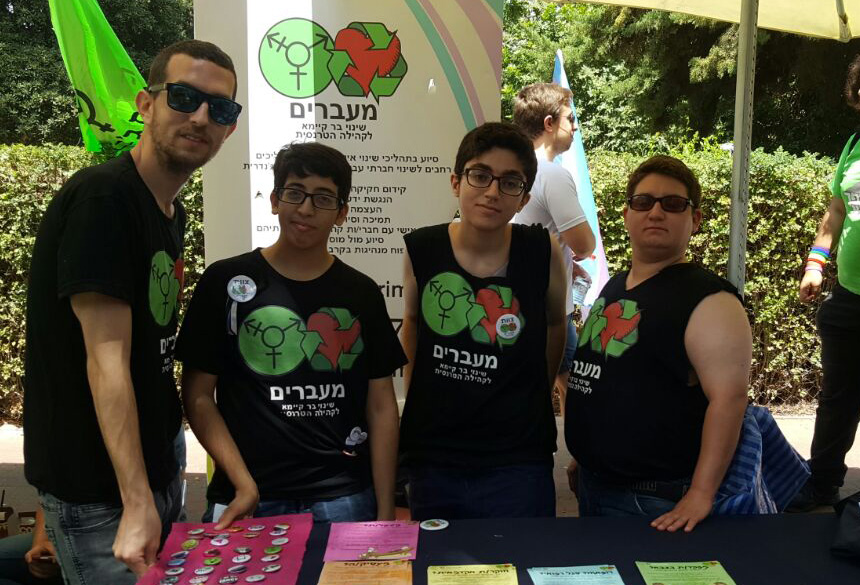 Volunteers of “Ma’avarim” at the annual Gay Pride Parade in Haifa, 2016. (Photo: Facebook)