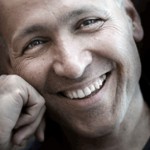 Yossi Avni-Levi is an Israeli writer and diplomat. Avni-Levy was born in Israel to parents who immigrated from Afghanistan and Iran. He served in the army as an intelligence officer, and earned a BA in Middle Eastern History and Arabic (at the Hebrew University) and a law degree. He served for ten years as an Israeli diplomat in Germany, Yugoslavia and Poland, so most of his books were written out of the country.  Avni-Levy currently serves as spokesman for Israel’s Foreign Ministry.

Yossi Avni-Levy  is one of the most prominent artists in the LGBT community. His first book, “The Garden of Dead Trees”, raised widespread controversy and raised the question of the existence of the gay community in the Jewish-Sephardic community, and the lives of loneliness and alienation of homosexuals during the period described in the book, which was published in the mid-1990s. Avni-Levy was for many years under harsh criticism from gay community activists, who attacked the gay characters in his books, and the gay life style he chose to describe and the fact that he published his books under a pseudonym.

Recently, after years of working at the Ministry of Foreign Affairs and a number of senior positions in state institutions,  Yossi Avni-Levy spoke publicly about his sexuality, in a revealing and extensive interview with Yedioth Ahronoth. In the interview, he described his relationship with a German partner, and his non-explainable relationship with Germany and the German people. He also dealt extensively with the question of sexual identity in an official capacity on behalf of the State.

His books have been translated into German, Polish and Greek. Avni-Levy also publishes book reviews in the press (Ha’aretz, Yediot Aharonot), and for the first time he began to identify himself by his real name (Levy ) next to the pen name (Avni). He won several literary contests (including by newspaper “Haaretz” newspaper “Ma’ariv” and others). In 2007, after releasing his 4th book, ‘Ish Lelo Tzel’ (‘ Man without a Shadow,’ which is now being made into a feature film), he received the Prime Minister’s Prize for Hebrew literature.