Yair Hochner, founder of the TLVfest, Tel Aviv’s International LGBT Film Festival, who also served as its Executive Director during the festival’s 12 years of existence, announced his retirement from the festival’s management.

Yanir Hochner has steered the festival through some turbulent times due to external pressures. In June 2017, A Wider Bridge reached out to help TLVFest, following an attack from Boycott Divest Sanctions (BDS) activists. Unfortunately, several scheduled participants of TLVFest have pulled out of the festival, citing pressure from the Boycott, Divestment and Sanctions activists, despite the festival’s message of peace, equality and freedom of expression. A Wider Bridge raised nearly $20000 in support of TLVFest in order for it to continue its valuable work in Israel and around the world.

Yair Hochner will continue to serve as artistic director of the festival, while the management will be entrusted to producer Gil Sima. Sima has just entered his new role as part of the preparations for the upcoming festival, which will open in five months.

“After 12 years of managing the festival, I’m fed up with bureaucracy and with management personnel who have no understanding of the film world. I have exhausted the war on budgets with various bodies, and I prefer to deal only with the artistic aspects,” Hochner said in a statement. “Gil Sima has been part of the festival for a decade, he initiated the LGBT Pitching, produced the film ‘Gutman Times Five,’ which was the initiative of the festival in memory of director Amos Gutman, and I feel that he’s the natural choice to continue my way in the management aspect and to work alongside me as the artistic director. ”

Hochner, 42, is a director, screenwriter, producer and film critic, and serves as the editor of the critic section of the website ‘Seret.’ Over the years, he has directed two feature films: “Good Children” (2005), which told the story of the love of two escort service boys in Tel Aviv and earned Hochner the prize for upcoming talent at the Los Angeles-based Film Festival, OutFest, and ‘Antarctica’ (2008) that followed a group of young gay and lesbian people in Tel Aviv.

He founded TLVFest in 2006, as a platform for public screenings of LGBT films that do not get commercial screenings in Israel. Since its establishment, the festival has taken place annually at the Tel Aviv Cinematheque. It hosts creators from all over the world and holds a short film competition. Alongside that, TLVFest there’s a monthly screening club, which screens LGBT films around the country. In 2008, TLVFest was a partner in the production of the “F***ing Different Tel Aviv” feature, which collected a number of short films by local filmmakers, and was screened as part of Berlin’s Festival Panorama. At the last Cannes Film Festival, Hochner was invited to be a member of a panel that gave the award for the best queer film. 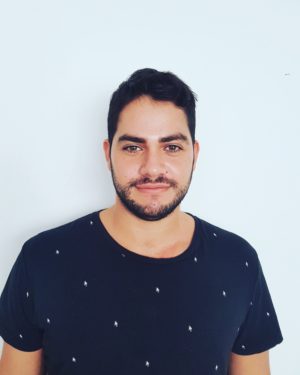 Sima, 30, is a producer and content editor. In the past he was the lead producer of Alma Productions and director of Hot Prime TV channel. Today he owns the production company Sima Films. “I believe that it is possible and necessary to fight in order to increase the budgets and visibility of LGBT cinema work in Israel, especially the festival, which is the largest gay cultural event in Israel,” Sima said.