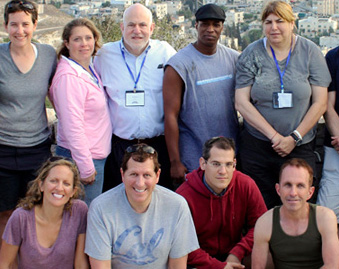 The Israeli LGBT community is getting ready for A Wider Bridge’s next trip to Israel: This week Mako Pride, the biggest online media source for the LGBT community in Israel, has published an interview with Arthur Slepian, Executive Director of A Wider Bridge.    He  speaks about the trip and about our goal to have volunteers based in Israel.

The connection between the LGBT community in Israel and in the US is getting stronger: in a couple of months another group of LGBT people will arrive in Israel for a special journey, where they tour the country, learn about the LGBT community, and meet with Israeli LGBT leaders. “Israel is a place where LGBT Jews can be free to express their Jewish and LGBT identities,” says Arthur Slepian, executive director of A Wider Bridge. Would you like to volunteer in the project? All the details here.

A year has passed since A Wider Bridge brought a group of American LGBT people to get to know Israel and its LGBT community. “A Wider Bridge has grown quite a bit since last year’s trip,” Arthur says in a phone call conversation from the US, “not only have we expanded our team and now have people spread across three cities, we also have done programs in the past year in San Francisco, Seattle, Los Angeles, New York City, Boston, and Washington DC.”

“We have also greatly expanded our following online, with high levels of traffic to our website and social media. And we are doing more cultural programming, such as films and concerts. We are especially excited about our upcoming concerts featuring Rona Kenan and Tamar Eisenman, who will be performing together in New York City, Boston and San Francisco.”

A Wider Bridge’s next trip to Israel will take place from October 30 to November 9, 2013. “We haven’t closed the list of participants for this year yet so there’s still time to join,” Slepian says, “Last year we saved Tel Aviv for last, but this year we will start there. People enjoyed their time there so much, and it seems to be the best introduction to Israel for LGBT people.”

“If I had to mention three highlights of last year’s trip I would say- an evening where we got to meet several young Israeli LGBT film directors and saw samples of their work, our Shabbat and dinner with the religious community of Yachad in Tel Aviv, and our visit to Safed, which everyone loved.”

Why do you look for volunteers from Israel? What would their work be? What kind of people are you looking for?

“A Wider Bridge wants to serve the LGBT communities of both the U.S. and Israel, bringing them closer together and helping to create opportunities where we can support and learn from one another. We want volunteers, and perhaps staff, in Israel who can help us to be sure that we are getting to know all the rising young leaders and artists in the community, so that we continue to bring the best of the community to the U.S. We are looking for people who are knowledgeable of and well connected to the community but not necessarily tied to any one particular organization. We also want to be sure we are most up-to-date about what the current issues and needs of the community in Israel are, so that we can help the U.S. LGBT  community be most supportive.”

Can you tell us a little bit about the new New York branch of A Wider Bridge?

“In New York, we now have two people there as part of the team of A Wider Bridge. Jayson Littman is serving as our NY Area Director, and he is also the founder of He’bro and a very active member of New York’s gay Jewish community.  Just in the past few months, we have had programs in New York City featuring leaders from IGY, Hoshen, and Jerusalem Open House, as well as with a leading Israeli trans activist.  We also had a great program just a few weeks ago featuring Yair Hochner and his film “Antarctica”, which the audience loved. Our staff and volunteers in New York City are working to make A Wider Bridge a truly national organization.”

According to your experience, what is that thing that attracts the Jewish LGBT community the most to Israel?

“I think LGBT Jews are attracted to Israel because it is a place where they can be free to express their Jewish and LGBT identities. And also because LGBT Jews are accustomed to being a minority of a minority. To be in Tel Aviv, a bustling Israeli metropolis where LGBT people seem so easily accepted, can be a liberating experience. In ten days, we learn so much, have deep experiences of personal transformation, and at the same time, have so much fun! Not many places in the world where LGBT Jews can do all that!”