Sally Goldner was raised Jewish but went to an Anglican boys’ school. Here she shares her journey of sexuality, gender and faith. 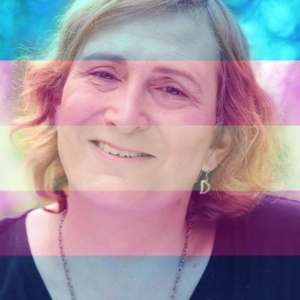 Right now is a very important time of year for those with a connection to Judaism. We’ve just passed Rosh Hashanah (the Jewish New year) and Yom Kippur, the highest of high holy days, gets underway in the evening of Tuesday 11 October. These days are important for Jewish people; thankfully for Jewish people who are LGBTI and their families they are becoming increasingly a time of joy rather than one of isolation and feeling torn apart.

I would acknowledge immediately that my journey is my journey regarding my faith and being bi and trans. Everyone’s journey in these areas is their own and I affirm that. Personally, I had an interesting journey with my faith. I was a nice Jewish (deep down) girl who spent all of my 13 years at school at an Anglican boys’ school. I received some good messages about Christianity generally and also some good messages at Jewish Sunday school.

Unfortunately, I didn’t get any affirming messages regarding LGBTI and Christianity while at school. I clearly remember Year 10 (1980) and the chaplain taking the religious studies class. I remember his patronising tone of voice saying “there are homosexuals. These people are sick; they need our help” – not very affirming. And Judaism, well nothing at all – I and all LGBTI seemed invisible.

Thirteen is also a critical number in Jewish life. Those assigned male at birth experience the ritual of bar mitzvah – the coming of age of a Jewish boy into a man. I wondered for a long time why the experience didn’t quite resonate for me.

After beginning to be truer to myself in 1995 regarding gender identity and sexual orientation, spirituality and faith, which had been buried deep down, began to re-surface. The support of the Jewish Lesbian Group in 1998 helped re-create a sense of connection back to my true self. There were only one or two areas of connection with Judaism and LGBTI for almost a decade. Gradually, as understanding progressed, this changed for the better.