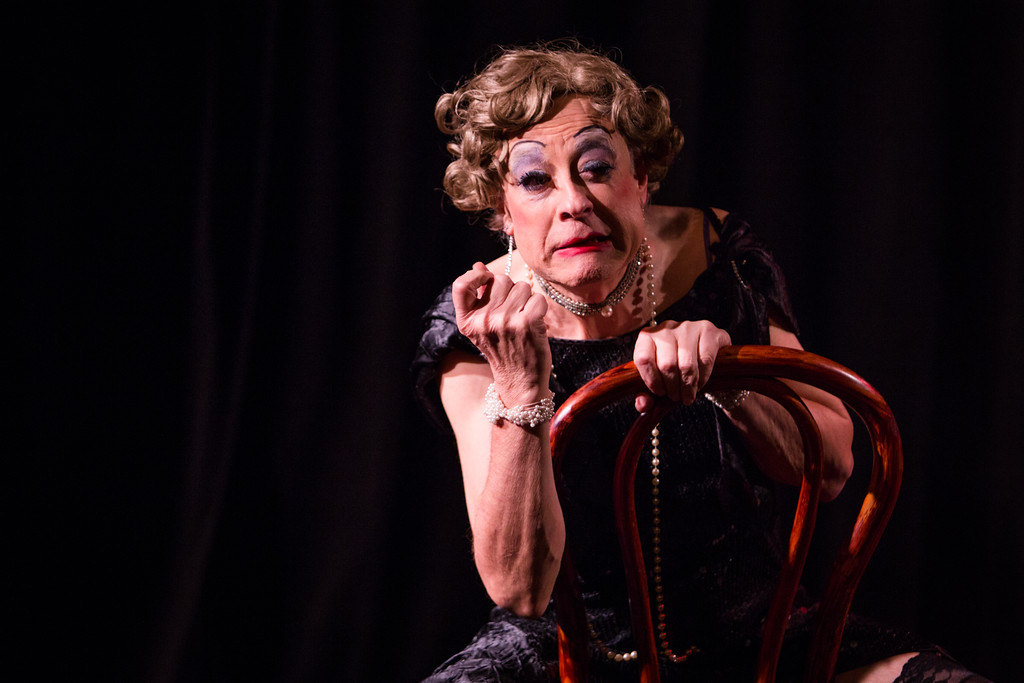 I felt a little daring as I went out alone last weekend—in a leopard-print dress and red lipstick—to a dimly lit boîte to experience Lavender Songs: A Queer Weimar Berlin Cabaret. Sans spouse or spawn, I sat solo at my own little table in the back of the room and ordered a gin and tonic. It was served to me in a wine glass; the show had sold out and the club had run out of tumblers. “Classy, no?” the handsome waiter said with a dimpled smile as he set my drink down. It felt right.

Suddenly, on the tiny stage in front of a deep-blue velvet curtain, there was Tante Fritzi. A woman of a certain age, she wore a sparkly black sleeveless dress, two boas, a long rope of pearls, dangly rhinestone earrings, a rhinestone choker, a jeweled hair clip, armfuls of bracelets, and a loosely pin-curled short wig in an ashy tone not found in nature, much like the one my own bubbe used to wear. Her huge eyes were framed with enthusiastically applied blue eyeshadow and giant false lashes (one came semidetached partway through the evening). She looked like a Hirschfeld drawing, made of animated swoops and droops. In a brassy yet tremulous voice, she began to sing:

Tante Fritzi, a former rent boy turned “kabarettist extraordinaire,” is Jeremy Lawrence, a playwright, translator, and actor who often plays Tennessee Williams. Lavender Songs premiered in 2008, but has been rewritten to reflect our current political realities.

The show spotlights the work of Friedrich Hollaender and Mischa Spoliansky, two Jewish songwriters who managed to escape Nazi Germany. Other Jewish artists featured include lyricist Fritz Löhner-Beda and composer Richard Fall, both killed in concentration camps; lyricist Marcellus Schiffer, who committed suicide in 1932; composer Rudolf Nelson, who survived the war in hiding in the Netherlands; lyricist Kurt Tulchosky, who killed himself in 1935; singer Fritzi Massary, who fled Germany for Switzerland in 1932; and singer Paul O’Montis, who died by hanging at the Sachsenhausen concentration camp in 1940. Several of the creators and performers were both gay and Jewish. Only three LGBT artists represented in the show survived the war—including Marlene Dietrich.