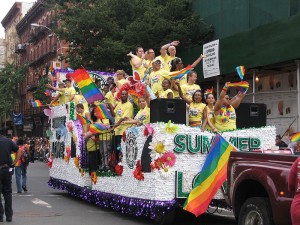 Earlier in June, I marched in the Israel day parade with a contingency of gay, lesbian, bisexual and transgendered Jews.  It was the first time LGBT Jews were allowed to march under their own banner and none of the conservative Jewish “passerbys” seemed to mind.  It made me wonder, “If gays marched in the New York Israel day parade and no one protested it, did it actually happen?”

I’ve been a spectator of this parade for many years, but as I lined up to meet on 54th Street between Madison and Fifth Avenue, there was something special about marching as a proudly gay Jew who supports Israel.  Previously, my attendance at the Israel day parade was to catch up with old friends, see the girls I dated, the Rabbis that taught me, and finally be in an environment where chabadniks assume I’m Jewish and just ask me if I “put on tefillin that day”, just because I’m not wearing a yarmulke.

Growing up Orthodox, in the Washington Heights section of NYC, I never grew up with a strong connection to Israel.  Breuers, the elementary and high school I attended never really had an educational focus on Israel and most of my graduating class attended post-high school Yeshivas in Lakewood, Baltimore or Philadelphia.  I spent two years in Israel and developed a connection to it and it was in Israel I realized that I was gay. As I grew closer to G-d, I also asked Him over and over again what was to be with my life and prayed for “normalcy”.

As I finished yeshiva in Israel and college in New York, I became more comfortable with my gay identity and reconciled my Jewish faith and sexual orientation.  While not identifying as Orthodox any longer, I remained connected to the Jewish community: I joined my local LGBT synagogue and my connection to Israel grew stronger.

I would come to visit Israel many more times and realized Israel encompassed all the parts of my being: whether it is my current or former Jewish identity or my gay identity, I always felt at home in Israel.  Marching in the Israel day parade to no protest from the local orthodox or traditional Jewish community made me proud to be a Jew amongst Jews.  The Jewish community, and even many in the moderate-right, has come to learn that there is diversity within our walls, and this is a success.

This past Sunday, the Israeli consulate of NYC participated in the LGBT Pride Parade along 5th Avenue.  It was just a few weeks before, I was on this very same avenue marching as a gay supporter of Israel, and here I am now marching as a supporter of Israel amongst my gay community.  With over 100 marchers, it was amazing to see the diversity of Jews marching with the Israeli contingent.  Many whom have never even visited the holy land, but also, connect to Israel in many different and individual ways.

I was saddened to see a small group called Queers Against Israeli Apartheid, a small and insignificant group of about nine people who used a parade –  one that is meant for celebration –  to spread their hateful message about Israel.  I stopped to wonder, “Wow, I have spent so many years seeking acceptance from the traditional Jewish community and have finally received it, only to experience hate from the far-left LGBT community.”  This passed by quite quickly.

As we marched south on 5th Avenue on this sunny pride filed Sunday, spectators from all around the world cheered us on with “shalom”, “mazel tov” and “I love Israel!”.  This celebration and affirmation from people along the parade route made me more confident and connected to the State of Israel.

The Israel day parade marched north of 54th Street and the LGBT pride parade marched south of 40th Street.   While both of these prideful parades marched in two different directions physically, I felt pretty good knowing that between the two parades: gay supporters of Israel and Israel supporters of the LGBT community, that our support and love for Israel was shown throughout Fifth Avenue.

I think 5th Avenue is just a little bit better off than it was a month ago.

Jayson Littman is the founder of Out! for Israel, the pro-Israel voice in the LGBT community.  For more information, please visit www.outforisrael.org or email Jayson at jayson@outforisrael.org