Does a man who identifies as bisexual but is living with a woman considered part of the LGBT community? Lesbian Israeli activist Rotem Baruchin encountered a case of biphobia at her work place and writes about the importance of LGBT identity briefing: “when we hung flags, whether we want it or not, we invite comments, questions and interest.” 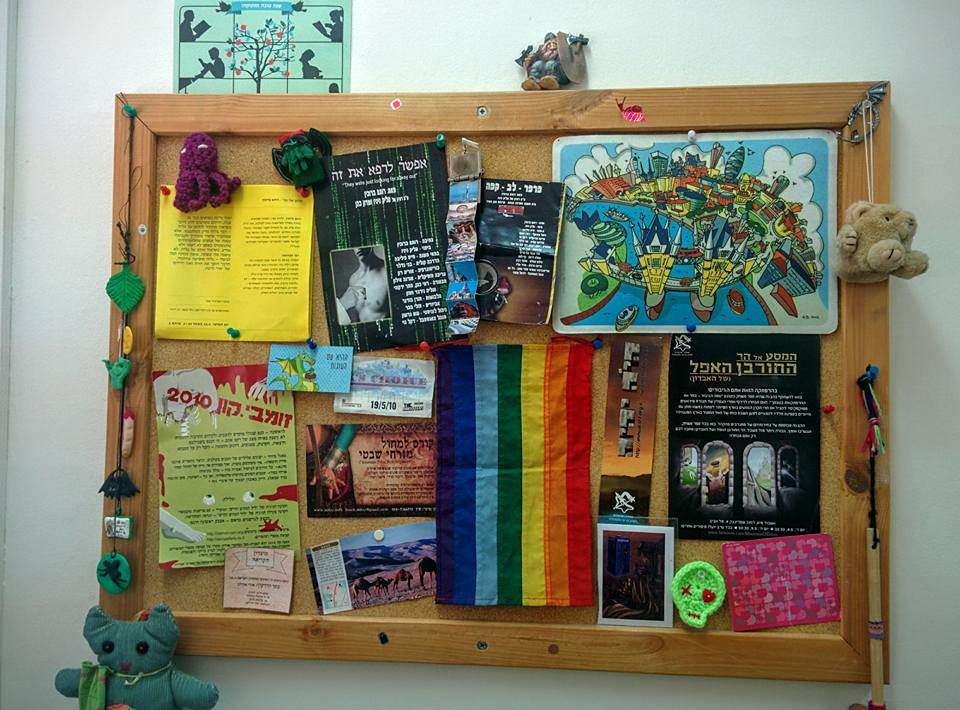 A woman came into our office yesterday to consult with one of the web programmers, and saw the bisexual pride flag hanging by one of my colleague’s desk. She began to praise him for his courage to “put something like this on his wall” (that was when my suspicion started) “even though he’s not part of the community” (here’s when I started breathing deeply, counting to ten). My colleague tried to explain to her that he *was* part of the LGBT community, but she insisted that he’s considered a “supporter” and a “sympathizer” and that it was really very nice of him, but he was not part of the community. Another programmer who sits with us added a sarcastic comment, as usual, and made the whole discussion even more loaded. My colleague then got up, went out to the kitchen to make himself a cup of coffee and calm down, and I also took a minute to calm down, and when the woman got up to leave I said to her, “Can I ask you a question? what does it mean to you to be ‘a part of the community’?”

It had a potential to deteriorate into a fight, because she immediately began to defend herself, but I explained to her that I wasn’t angry, I was just trying to understand why she thought that a man who identifies as bisexual was not part of the LGBT community. She told me that “from the conversations I’ve had with him I understood he was not.”

“Because he lives with a woman? But he says that he’s attracted to both men and women, it has nothing to do with whether he lives with a man or with a woman. If I was interested in both men and women myself, and living with a man, it wouldn’t have made me straight. It would not have made me “sympathetic” or “supportive.” It was part of my identity.”

She listened, a little surprised, then apologized for stating something that she did not seem to understand enough about, and then she even thanked me for explaining. She also said she shouldn’t have said anything and that it was rude. I agreed with her, but I didn’t say that. Instead, I pointed to the rainbow flag above my desk and told her that when we hung flags, whether we want it or not, we invite comments, questions and interest-and I personally, frankly, embrace the interest. I want to be asked questions. I’ve already explained to dozens of curious and inquisitive people the difference between bisexual and pansexual, what is transgender and what is gendequeer, and what is the difference between F to M and M to F transgender. I already explained to so many people why is it so important for us to be allowed to marry in Israel, what is this discrimination that we are talking about, why we need pride parades for, and if we have a parade, why do we have to go naked in the streets.

I also answered more personal questions. When did I know I was lesbian, had I ever been attracted to men, did I believe I could be attracted to a man, did I think that being lesbian was not natural, and why was it so important to me to wave my personal preferences by hanging a flag in my cubical?

On my first day at work I told my manager that I was lesbian and that I had a girlfriend (I wish every LGBT person in the world that their managers respond the way mine did), and when we talk about our partners in our open-space office (“My wife fell asleep in the middle of that TV episode,” “my husband bakes the best carrot cake in the world”, etc.), I participate in them and talk about my partner freely. When I talk about my life and my relationship just like the others, I answer the curious questions (the more and the less annoying), I neutralize discomfort, I normalize the situation, I show people who do not understand enough and who do not know the other side well enough that we are just like them, and I answer the questions that they did not dare raise or did not have an answer to in the society in which they live.

It’s true, LGBT identity explanations ain’t easy, it is not fun and it requires coming out of the closet each time anew and not always in the frameworks that are convenient for us. Being able to be out of the closet, talking about it openly and freely, and not bearing any consequences other than a few invasive questions from time to time is a privilege in itself, and I appreciate the fact that I have it.

I wish it will come a day when LGBT identity briefings will not be required. But until then, I’m happy I have these daily small and endless opportunities to make my little spot in the world a little bit better.