A Wider Bridge wishes all of our Jewish supporters: G’mar Hatima Tovah. Yom Kippur, the holiest day of the year on the Jewish calendar begins this evening (Friday, September 29) and ends tomorrow evening. To explore the intersecting world between A Wider Bridge and this important holiday check out the trending hashtag #YomKippur on our website. A Wider Bridge

A new documentary short looks at being Orthodox and LGBT in Israel. Lesbian activist Sarah Weil discusses The Meeting Place project which fosters unprecedented dialogue between the LGBT and Orthodox communities. In 2016, Sarah toured the United States with A Wider Bridge to discuss her work. A Wider Bridge

A precedent-setting ruling was handed down today at the Family Court in Eilat, regarding parenting orders for lesbian couples. WDG

Education Minister and chairman of Jewish Home party, Naftali Bennett, didn’t rule out that a member of the LGBTQ community could serve in the ranks of his party. Religious Zionist public figures did not respond to a request for their comments on the matter. Religious activists in the LGBTQ community, on the other hand, welcomed the remarks and said that a significant breakthrough had been made. Kipa

The start of TV’s Fall season features Israel in two shows. Amazon’s “Transparent” is largely set in the country, and explores issues of identity and sexuality, including the “Pinkwashing Machine” episode. Conan O’Brien has an hourlong special based in Israel. O’Brien uses his charming ‘idiot abroad’ shtick to poke gentle fun at Jews, Palestinians and mostly himself. JTA

MIAMI — THIS SUNDAY! A Wider Bridge Mission Alumni Tony Lima and Cindy Brown, in partnership with SAVE and Lambda Living, have created an upcoming community conversation on Pinkwashing and Anti-Semitism. A Wider Bridge

PENNSYLVANIA — On the anniversary of the ‘Don’t Ask, Don’t Tell’ repeal, Captain Jon Cutler, a Rabbi at Beth Israel Congregation of Chester County, shared about serving in secrecy – and finally breaking the news to his friends. The Times of Israel

If you don’t throw your kids out of the house when they come out to you, does that mean you accept them? Shai Porat, an Israeli father, reflects on the journey he went through from a secret homophobia to volunteering at Tehila (Israel’s PFLAG), after his two sons came out to him. Mako Pride

Journalist Cliff Savren argues that eliminating the Orthodox monopoly on marriage will benefit everyone, including same-sex couples. Cleveland Jewish News

Photo of the Week 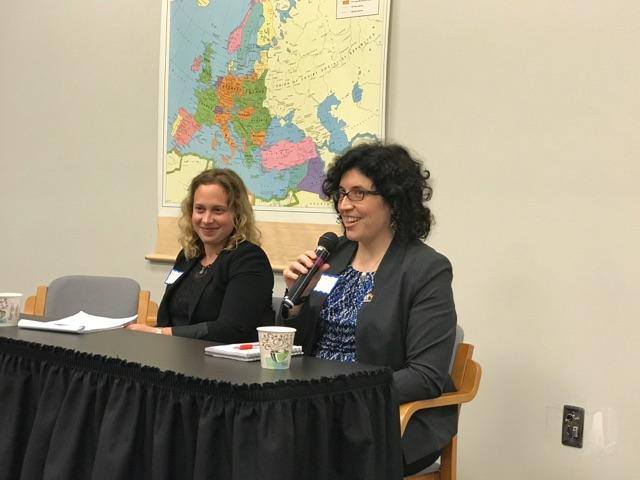 AWB’s Midwest Manager Laurie Grauer spoke at the event “Refusing to Choose, LGBT, Jewish, and Pro-Israel”, in Farmington Hills, Michigan, earlier this week. “I was humbled by the amazing energy and passion shown by the Jewish and LGBTQ leaders I met during my visit and speaking engagement at the Detroit Holocaust Center,” Laurie said. “Both Sam Dubin and Ron Elkas did an outstanding job of bringing their community together for AWB’s inagurual event, ‘Refusing to Choose.’ I look forward to working with them to expand AWB’s impact in the original ‘Come Back City.'” Facebook