Through mourning the loss of 16-year old Shira Banki z”l, fatally attacked at the 2015 Jerusalem Pride March, the city’s LGBTQ community emerged as a thread to bring together a city divided at the seams. LGBTQ leaders took to Zion Square, the central plaza in the heart of Jerusalem, to hold open forums for unprecedented public discussion in a project called the Meeting Place. We spoke to LGBTQ activist Sarah Weil about the Meeting Place and how it is transforming the public space into a place of LGBT visibility and dialogue. My Jewish Learning

Israel-born art consultant Thomas Rom, is placed at number 5 in this year’s 100 Most Eligible Bachelor list in popular gay magazine OUT. In a special interview with an Israeli website, Rom speaks about being on the list, dating, and the longing for Israel. Mako

Bay Area Jewish LGBT people have condemned the more than 100 anti-Semitic bomb threats that have occurred at Jewish community centers and other places around the country and vow that they won’t be deterred from being open and welcoming. The Bay Area Reporter

CALIFORNIA — Amid the national debate over transgender rights and the use of school bathrooms, a number of local Jewish summer camps in Southern California quietly have been adjusting their policies to accommodate transgender students. The Jewish Journal spoke to four of them: Camp JCA Shalom, Malibu, Camp Alonim, Simi Valley, Camp Ramah in Ojai and Habonim Dror Camp Gilboa, Big Bear Lake. Jewish Journal

NEW JERSEY — How to make A Jewish activist: Veteran activist and friend of A Wider Bridge Steven Goldstein of Teaneck, new head of the Anne Frank Center, talks about his life. New Jersey Jewish Standard

OHIO — The documentary ‘Before You Know It,’ which focuses on the lives of LGBT adults and will be shown for free March 30 in conjunction with Jewish Family Service. akronist.com

PHILADELPHIA — Over the last year, more synagogues have been asking for trans sensitivity trainings for staff and members, according to Phoenix Schneider, program director of the nonprofit Jewish Family and Children’s Services’ LGBTQ initiative. Philly.com

A gay Israeli high school senior was surprised to find that the Ministry of Health regulations prohibit him from donating blood. In a courageous step he stood in front of his whole school and came out to protest against discrimination. WDG

A Tel Aviv Regional Labor Court ordered Israel’s Ministry of Transport to pay NIS 100,000 in compensation to a senior employee, after her department manager made fun of her sexual orientation and called her partner “Ishtata [translation: ‘her husband-wife’] or whatever you call it.” Mako Pride

Shahaf Ben-Yakov, a female combat soldier, is part of Pride Blue and White, a new group of women and LGBT officers that aims to speak out for diversity within the Israeli army and push back against growing religious influence on the powerful Israeli institution. JTA

For four decades, gay rights activists and couples who appealed to the courts for the right to marry their partners were fighting against a legal system. The real battle, however, was against public perception. Evan Wolfson, founder of the national bipartisan organization Freedom to Marry, outlines the strategy that transformed public understanding and led to a triumph in the Supreme Court in June 2015. Big Think

When Life Really Was a Cabaret—and Cabaret Was a Life: Marjorie Ingall went to see Jeremy Lawrence’s Lavender Songs: A Queer Weimar Berlin Cabaret in New York and saw a Jewishly inflected, queer songs cabaret that brings Weimar Germany back to life with humor and music. Tablet

What does a holiday of masks teach us about visibility? Transgender advocate and educator Hannah Simpson says that in a modern era of opaque government, sneaky decrees and increasing incitement threatening both my Jewish and transgender identities, the 2,500-year old Purim story of revelation and redemption feels more relevant than ever. Moment Magazine

Rabbi Ari Moffic was introduced to a children’s book called Zero, which reminded her of a talk with The Aguda- The Israeli National LGBT Task Force – she heard earlier this year. Interfaith Family Network Blog 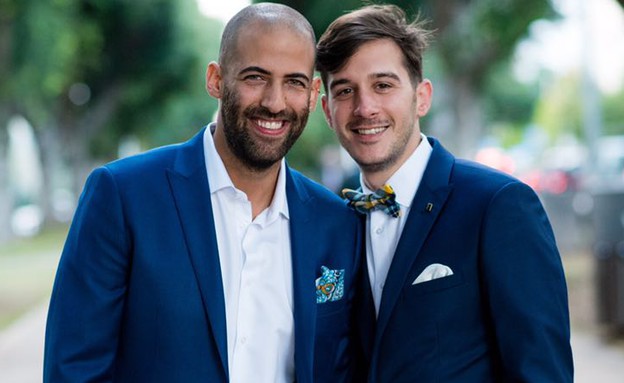 Raz and Yotam who got married in December 2016 share their wedding album. A Wider Bridge