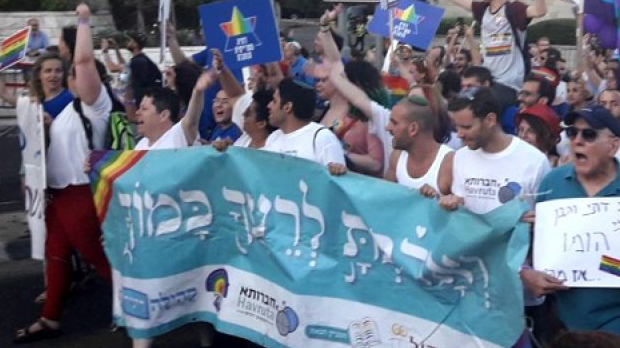 Thousands attend the 16th annual Gay Pride in Jerusalem under the theme “Religion and LGBTQ.” A Wider Bridge

During his visit to Israel with A Wider Bridge, Freedom to Marry’s Evan Wolfson met with Israeli journalist Ayelet Shani to discuss gay marriage in Israel and in the United States. Their conversation was transcribed and published in Shani’s acclaimed Haaretz column, “Me in Conversation.” A Wider Bridge

The High Court of Justice was set to issue its ruling Thursday morning on a petition demanding Israel permit single people and same-sex couples to arrange surrogate births in Israel. The ruling, however, was postponed by six months to allow lawmakers to follow through with new legislation that might render the petition obsolete, justices said. Haaretz

Transgender Israeli superstar Dana International wrote a beautiful and insightful column about Jerusalem in the Israeli papers in regards to Jerusalem Gay Pride. Read the translation here. A Wider Bridge

A group of LGBTQ military reservists have published a letter calling on the Israeli government to fire chief rabbi of the city of Safed, following his extreme homophobic remarks. A Wider Bridge

CHICAGO — The organizers of Chicago’s annual SlutWalk announced that Zionist symbols would be allowed at the August 12 event, overturning an earlier decision which barred participants from carrying any such religious signs. The Times of Israel

SAN FRANCISCO — Syrian-born Subhi Nahas knows he is lucky to be alive. A gay man, he understood that his life was in danger every moment in his homeland. On July 22 he participated in a Q&A session at the S.F. Jewish Film Festival. JWeekly

SOUTH CAROLINA — Pastor Abraham Belanger with First Fruits Community Church held an interfaith meeting in Summerville, South Carolina. He discussed topics such as the Muslim ban and the Holocaust with Rabbi Greg Kanter of Kahol Kadash Beth Elohim Synagogue and Aisha Miller of the Central Mosque of Charleston and founder of Knowledge Erases Hate. The Summerville Journal Scene

Attorney Ellen Trachman of Trachman Law Center, LLC, a Denver-based law firm specializing in assisted reproductive technology law and adoption, gives a brief on surrogacy and adoption of LGBTQ people in Israel. Above the Law

Rabbi Avi Novis Deutsch who marched at the gay pride parade in Jerusalem says that there is nothing immoral about being a member of the LGBTQ community, and that We must repair a society oblivious to those branded as different, other, abnormal and even immoral. Haaretz

Rabbi Howard Goldsmith, spiritual leader of Congregation Emanu-El of Westchester, writes about the “values that really matter” in regards to morality and strong families. The Forward

A new book re-examines the purposeful partying of Tel Aviv’s Queerhana movement, set to the backdrop of political tension and social injustice. i-D