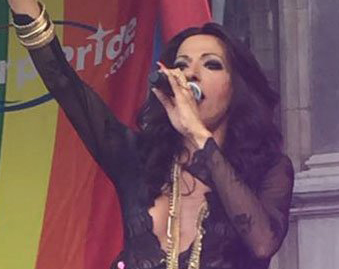 Dana International never misses an opportunity to show the goyim that she’s a Zionist and a proud Israeli woman.

After being interviewed by every European magazine, radio station and television channel possible and proudly telling about the small country she comes from, now the international diva takes her advocacy work a step forward, preforming “Hava Nagila” at the gay pride parade in Antwerp and surprises the audience.

International came to the parade as a guest of honor, gave a performance that left no one in the audience indifferent. At the end of the show, Dana decided to dedicate a special song to the audience. She sang “Hava Nagila” while filming the audience, who filmed her back, and uploaded the video to her YouTube page. Before singing, the singer explained the song to the audience, saying “It’s a thousand years old, does not belong only to the Jews and talks about joy, dancing and love.