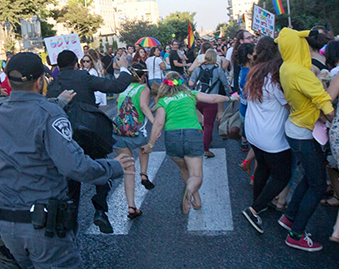 Join A Wider Bridge in supporting the work of Jerusalem Open House as they work to serve the community in the aftermath of Thursday’s violence. Click Here to Donate –>

Jerusalem Open House (JOH), Jerusalem’s flagship LGBT organization and the organizer of the Jerusalem March for Pride and Tolerance, is seeking to raise emergency funds to assist with the aftermath of the violent attack at Thursday’s March.

There will be a massive rally Saturday night at 9:00 p.m. in Jerusalem’s Zion Square, with President Rivlin, LGBT leaders, and thousands of supporters and allies expected to attend. A Wider Bridge commends the City of Jerusalem for working with JOH to stage the rally — their first-ever official collaboration.

Additionally, four victims are still hospitalized following yesterday’s attack. JOH is keeping their offices open from early morning to late at night, addressing the needs of the victims their families, and the larger community. The center continues to be packed at all hours.

Thank you for your consideration – we are stronger when we stand together.

A WIDER BRIDGE STATEMENT ON VIOLENCE AT JERUSALEM PRIDE MARCH

Earlier today, six participants were stabbed during the 14th annual Jerusalem March for Pride and Tolerance. Up until that point, the March had been joyous and peaceful. An Orthodox man ran through the street with a butcher knife. All injured were taken to the hospital. A haredi suspect was quickly taken into custody. Below is a statement from A Wider Bridge’s Executive Director, Arthur Slepian.

It is a tragedy that on a day that should be a moment of great pride in Israel, we are once again mourning an act of senseless violence.  After a decade of marching with relatively little disturbance, the Jerusalem March for Pride and Tolerance, was yet again the scene of an obscene act of violence, in which the same ultra-Orthodox perpetrator who stabbed three people in 2005, wounded six people in this year’s parade, one critically.  A WIder Bridge joins with Jewish and LGBT leaders in Israel and around the world in condemning this horrific act.   But we must do more than condemn the violence – we must also look to the ongoing inflammatory statements and rhetoric from some political and religious leaders that allow LGBT people to be seen as the other, as less than human, and to be demonized as the enemy.   There is nothing Jewish or moral in the message of baseless hatred that still emanates from some leaders who should know better, and that helps to sow the seeds of violence such as occurred today.

The Jerusalem March for Pride and Tolerance has become an important symbol in the ongoing struggle for LGBT equality, not only in Israel, but around the world.   It is not among the largest of gay pride marches – its 5,000 participants is dwarfed in size by the 180,000 who walked in Tel Aviv Pride last month, and pales in comparison to the millions who line the streets for gay pride in cities like Madrid, Sao Paolo, and San Francisco.   The Jerusalem March has a significance far beyond its size.   This march for gay pride, held annually since 2002, in the city that is Israel’s capital and the birthplace of the world’s three great religions, sends a message to the world about Israel, and about the possibilities for co-existence, diversity and pluralism in a city that so many different kinds of people treasure as their home.   And unlike most large gay pride celebrations, the Jerusalem March is known for the seriousness in its tone and decorum, fitting for the city in which it is held.  The march ends with a rally on the lawn outside the Knesset, as Israel’s LGBT community demands to be seen as an important part of the fabric of Israeli society.   It is a message that LGBT people exist everywhere in Israel, not only in Tel Aviv, and justice and equality needs to be pervasive throughout the country.

This march would not be permitted in any other capital city in the Middle East.  Those of us who love Israel have taken great pride in seeing this parade become such an important event for Israel and for the world.   We must ensure not only that the attacker is once again brought to justice, but that the freedom to march peacefully in Jerusalem is protected, and that this parade can continue to be a message to the world that LGBT people are a vibrant and respected part of Israeli society.

Jul 31, 2015 10:40 AM The anti-gay ultra-Orthodox extremist suspected of stabbing revelers at Jerusalem’s Gay Pride Parade appeared in court on Friday and the judge ordered that he remain in custody. AP

Jul 30, 2015 8:02 PM Dozens of former yeshiva students publicly came out of the closet Thursday in an open letter to a right-wing Israeli rabbi, in a rare move from members of a community that still places a taboo on homosexuality. The Times of Israel

Jul 30, 2015 12:44 PM Yishai Schlissel, an Orthodox Jewish suspect in the Thursday attack, was detained in Jerusalem after six people were injured during a violent stabbing at a pride march. CBC Canada

An ultra-Orthodox Jew who was convicted a decade ago of stabbing people at a gay pride parade here repeated the crime on Thursday. Wall Street Journal

The assailant, a Jewish man, was arrested; two seriously injured in attack; assailant is allegedly same man who carried out attack at gay pride parade ten years ago. Jerusalem Post