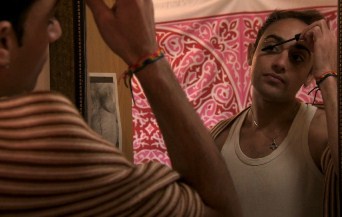 Currently being screened in festivals around the globe, Israeli Yariv Mozer’s documentary ‘Invisible Men’ exposes the life of gay Palestinian men in Tel Aviv on the run from death threats –

SAN FRANCISCO — “My purpose was not to show how horrible the Palestinians are toward their people, but rather to show Israel what its responsibility is toward them,” said gay Israeli filmmaker Yariv Mozer last month to an audience at San Francisco’s LGBT Community Center.

Mozer, 34, was in town for the screening of his film “The Invisible Men” at Frameline 36: San Francisco International LGBT Film Festival, where it won the best documentary award.

The film, which Mozer completed with his co-writer and producer Adam Rosner this past March after three years of work, documents the desperate situation of gay Palestinian men who illegally enter Israel and live in the Tel Aviv shadows.

The film follows the lives of three Palestinian “asylum-seekers” who are trying to avoid being caught by Israeli police and deported back to the West Bank, where they fear their families’ wrath. Mozer portrays the men living day-to-day, odd-job-to-odd-job, trying to blend in and go unnoticed in the bustling city.

After its world premiere in March at the Amnesty International Film Festival at The Hague, it premiered in Israel in May at Doc Aviv, where it won the special jury award.

Although there are no accurate statistics as to how many gay Palestinian men are hiding in Israel, Mozer emphasized at the San Francisco event that it was not a matter of a few cases but rather “a phenomenon,” as he put it. “There are no accurate numbers. We only know of approximately 30 cases being in the process of legal assistance. I am sure that more people are in the closet or on the run without exposing themselves,” he wrote in an email exchange with The Times of Israel.

Mozer chose to focus on the plight of these men through the personal stories of three individuals — all of whom sought help from the The Aguda – The National Association of GLBT in Israel. With the organization’s assistance, they received UN refugee status and the chance to start their lives over in a third country.

Read more about the film and watch the trailer.