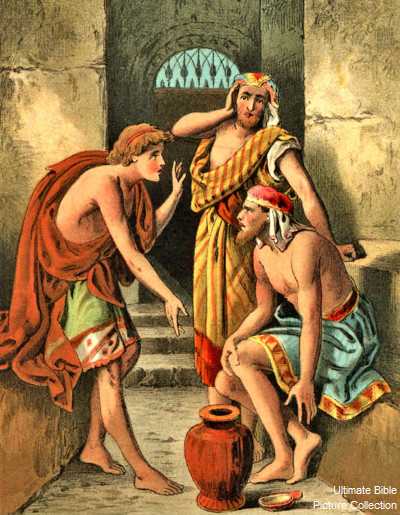 Joseph is a popular biblical character to “queer” — because rabbinic midrash claims he curls his hair, paints his eyes, and is as beautiful as his mother, Rachel (Genesis Rabbah 24), and also because he is one of the rare biblical men known for not sleeping with a woman (the lovely wife of Potiphar, who attempts to seduce him). But it’s not the living Joseph I want to queer — it’s the dead Joseph. Joseph’s bones, to be exact.

The bones of Joseph represent memory. By insisting that he be buried in the land of Israel, not immediately but generations later, Joseph forces his descendants to remember their promise over time, and thus to remember their identity. Only by remembering can they one day be free.

In fact, in later midrash, memory of the location of Joseph’s bones is crucial to the Exodus. Jewish legend holds that the Egyptians sink Joseph’s coffin in the Nile so the Israelites will never be able to find it, and thus will never be able to leave. Only one descendant of Jacob remembers where the coffin is. This one person is Serach, the daughter of Asher (mentioned in the Bible but only fully fleshed out in midrash). Serach, it is said, was blessed by Jacob with impossibly long life, for it is she who first told Jacob that Joseph was alive. During the Exodus, while the Israelites are packing, Serach shows Moses where Joseph’s coffin is, so that Moses can fulfill the promise of his ancestors to take Joseph’s bones out of Egypt (Midrash Tanhuma Beshalach). The aged Serach has preserved the knowledge of the location of Joseph’s bones for 400 years. Along with the bones, she has preserved the knowledge that a redeemer is destined to take the people out of Egypt. Without her, the people could not have remembered. Without her, no redemption could have taken place.

Only recently have I come to realize how crucial memory is to my identity as a queer person, and how deeply the history of GLBT folk has been suppressed. On my reading list has been Sappho, who showed me women loved women and poetry in ancient Greece; John Boswell’s Same-Sex Unions in Pre-Modern Europe, where I learned that same-sex marriage ceremonies occurred all over Christian Europe until the fifteenth century; the poetry of Jewish scholars of Muslim Spain, which often expressed love and admiration for young men; and books about how Native American tribes made space for “two-spirited people.” I now know that the same-sex unions of the United States have had their counterparts in ancient and medieval Ireland, Romania, and Greece, that some notion of a “queer” or “transgendered” identity was accepted by Navajos long before I was born, and that Jews were writing what might be called queer literature hundreds of years ago. Ritual and spirituality can be and have been applied to GLBT people, many times over.

Read the full story on My Jewish Learning