A Ballroom dance club for the LGBTQ community opened in Tel Aviv in June. This club offers classes in Ballroom and Latin dance, only you may Lead or Follow regardless of gender.

Same sex dancing has existed in Europe, America and Australia for several decades, but it now comes to Israel. Man/Man, Woman/Woman, Man/Woman. Any coupling is accepted. “Same sex dancing is very popular in the world,” said co-director Heather Gladding. “During the years I’ve been involved there were two couples that came from Israel, since it is not a sport offered here. We both thought, once we live in Israel we will start it up, giving an alternative to the LGBT community, an activity celebrating same sex partnerships.”

Studio LaDanza operated in London from 2004. As mainstream dancing still states in its rules that a couple must be ‘a man and a woman,’ Studio LaDanza broke down those rules by offering classes to same sex couples. It was the forerunner of such classes and many other ‘firsts’. Entering the first male couple to competitions, examinations and an all-male dance group, Guyz In Sync, which became European, GayGames and Outgames champions, this group also went on British National TV, dancing in a live show/competition. The studio’s sole purpose is to promote same sex dancing but within a professional, experienced business atmosphere.

“Dancing is like oxygen to me,” says Israeli co-director Hadass Armon. “It was twice taken away from me – but It always finds a way back in. Same sex ballroom dancing came first as a hobby. I danced before, but this came at the time of coming out and felt like a safe environment to explore the personal situation I was coming to terms with. It became a profession a few years later, having met Heather and opening Studio LaDanza, London, together.”

“It has been my mission for all these years to fight for equality in Ballroom and Latin dancing and to dance with whomever you like regardless of gender,” says Heather. “Lead or follow from choice, not because your gender decides it. Mainstream Ballroom dance still states that a couple is made up of a ‘man and a woman’. Only in the UK have the rules been changed ( through major pressure from the same sex dance community and UKSSDC , the same sex dance council) and now same sex dance couples can enter competitions with mixed couples. This is however important because the UK holds the world’s most prestigious competition, the British Open in Blackpool, which all the dance world attends. We have had one male couple and now one female couple compete in this event. It has been a very slow process but we are winning.”

Watch Studio LaDanza’s ‘Guys In Sync’ at UK’s show Got To Dance:

Hadass says she came out as lesbian at the age of 30 or 31, having been married. “I think I needed to make sure I was gay before changing the world for myself and my immediate family, she says”. “Once I realized it was ‘not a phase’ I came out. My husband at the time was very supportive and knew it was coming. The people close to me remained close and my mother took her time but now she is very supportive and accepting of my partner, my family and me.”

Directors Heather and Hadass have both worked in the field of dance for more than thirty eight years. Gladding trained in London, Armon in Israel, Canada, USA and London. They are Fellows of the ISTD (Imperial Society of Teachers of Dancing), top level ex-competitors, International Adjudicators and activists in the world of Ballroom dancing. Armon is Female President of ESSDA (European Same Sex Dance Association) and both were on the UKSSDC (United Kingdom Same Sex Dance Council) from its inception until they moved to Israel in 2015. 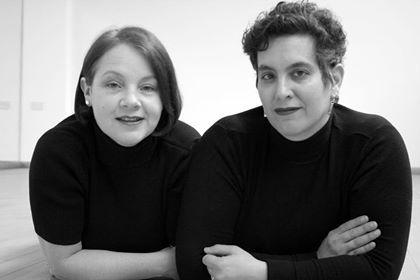 “My political involvement started in the UK, when a same sex Dance council was founded,” adds Hadass. “Later, I was elected to join the European Same Sex Dance Association, ESSDA. During my Co-Presidency we formed rules, so there was a standard of competition from which to work from; we in same sex dancing have formed an international body, but most importantly more and more renowned adjudicators are getting involved and interested in the work we do, thus achieving an acknowledgement and aiming for equality with the open circuit of ballroom dancing.”