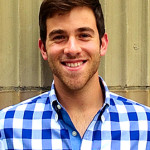 Tyler (Tye) Gregory has spent the last several years working for AIPAC (the American Israel Public Affairs Committee), most recently as the Regional Deputy Political Director for the Pacific Northwest, partnering with a broad array of community members to advocate for a stronger U.S.- Israel relationship. Tyler brings great strengths to the work of A Wider Bridge: his passion for Israel and for LGBTQ issues, and his experience in bringing diverse groups into greater engagement with Israel. Beyond his professional role, Tye is an active leader in both the Jewish and LGBTQ communities, including a leadership position in the Young Adult Division of the Jewish Community Federation (JCF). He is a recent graduate of the JCF’s LGBTQ Pathways to Leadership Program, a 9-month intensive program for emerging queer Jewish leaders in the San Francisco Bay Area. Tye is a graduate of the University of California, Davis, and remains active with Alpha Epsilon Pi.

Speaking about his new role with A Wider Bridge, Tyler said, “I am very excited to work with the staff, leadership and the dedicated supporters of A Wider Bridge, whose commitment has enabled the organization to flourish. There is so much to be gained by bringing the LGBTQ and allied communities of North America and Israel into deeper connection with one another. As LGBTQ communities and individuals, Jewish and non-Jewish, continue to discover and refine their perspectives on diverse issues in today’s public discourse, it is critical that we create opportunities for people to learn about Israel and Israelis, people working to build ­a country that shares our hopes, struggles, and values. In this new role, I am looking forward to building on the successes of A Wider Bridge, strengthening our valued partnerships, and developing new relationships across the communities of North America and Israel to further the goals of our organization.”

A Wider Bridge is thrilled to have Tyler on board. Tye can be reached at tyler@awiderbridge.org and at 1-866-288-5774, ext. 2. Please join us at AWB in welcoming Tye to A Wider Bridge.