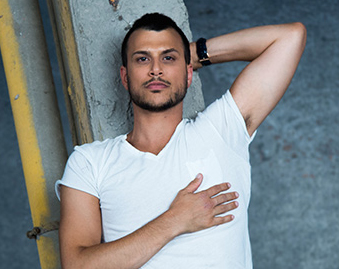 Watching that first episode was great – it was as exciting as my wedding day!” gushes Assi Azar, the creative talent behind hit Israeli rom-com, Beauty and the Baker, which aired on Channel 4 last night.

The 37-year-old, known in his home country as a television personality and co-host of Big Brother Israel, scored success with the series – despite it being his first time trying his hand at scriptwriting.

Now the unlikely love story between Noa Hollander (Rotem Sela), one of the richest and most beautiful women in Israel and Amos Dahari (Aviv Alush), a modestly-earning baker who still lives at home with his family, is available for UK audiences to view tonight and via Walter Presents, Channel 4’s on-demand service for foreign language dramas.

As one of Israel’s highest ever rated drama series, audiences were gripped by the tongue-in-cheek, modern day fairy tale, which also throws into the mix Vanessa, Amos’ spurned ex-girlfriend of nine years, Noa’s former celebrity boyfriend (played by Sex In The City’s Jason Lewis), her interfering agent, his meddling family and a relentless media circus.

If that’s not enough to tantalise, the series has also been produced by Keshet International – the same Israeli company behind the global television hit, Homeland.

Rotem Sela, 32, said the light-hearted escapism shows a side to Tel Aviv not seen in gritty Israeli TV shows such as Homeland and Hostages, which were both remade in the US.

“It’s kind of a Cinderella story with the guy as Cinderella,” she said. “It’s pure fun. What the creator wanted to achieve was a show where you could put your worries aside and laugh.

“Notting Hill was an inspiration for him. One scene was on a bridge near the London Eye. It was February and I had to wear a summer dress as it was supposed to be summer. I remember it being very cold.”
Read the story on the Standard