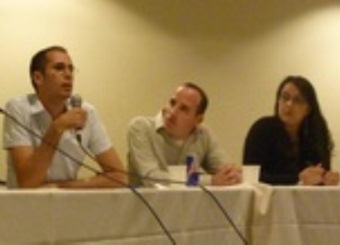 At age 26, Israeli native Eyal Liebermann first sensed he was attracted to men.

“I wasn’t ready to even think about it,” he recalled of his first inkling. “There is no such thing as being Orthodox and gay. Once you choose a lifestyle so opposed to religion, how can you be Orthodox?”

Turns out, you can.

Liebermann, now 36, is a leader of a growing movement in Israel’s Orthodox community. That movement says it’s OK to be gay and have a place within the religious community.

He and two colleagues came to San Francisco last week for two panel discussions. The tour, which also included stops in New York and Los Angeles, was presented by A Wider Bridge, a San Francisco–based organization headed by Arthur Slepian that fosters links between LGBT Jews here and in Israel.

Slepian is also chair of the LGBT Alliance of the S.F.-based Jewish Community Federation, and a past president of Congregation Sha’ar Zahav, a San Francisco synagogue that largely serves LGBT Jews.

The visiting Israelis’ core message: Despite hostility from fellow religious Jews, these gay and lesbian Orthodox Israelis refuse to be driven from the community they love.

At a Nov. 10 public gathering at San Francisco’s Congregation Beth Sholom, Asaf Lebovitz, 30, recounted how as a young man he met with his yeshiva rabbi to confess his same-sex sexual attraction.

The rabbi sent him to an Orthodox psychologist, who recommended he retain the services of a female sexual surrogate to learn about having sex with a woman.

“I ran to the Kotel to cry,” he recalled.

Of course, he did not follow the psychologist’s recommendation. Still, he did find surprising support along the way. The head of his yeshiva came around, asking Lebovitz what he could do to make him or other gay students feel more welcome.

Today, Lebovitz lives with his partner in Ariel, a Jewish settlement in the West Bank. He co-founded Havruta, a Jerusalem-based organization for Orthodox gay men. He also consults with the organization Israeli Gay Youth to help religious gay teens and young adults find their way.

Zehorit Sorek, 35, needed many years to find her way. She even married a man and bore two children, mainly because growing up strictly Orthodox, she didn’t know any other way. As a teen, she wrote off her attraction to other girls as a function of attending a girls-only school. “I knew it was wrong,” she recalled of her mindset then.

Things started changing a few years into her unhappy marriage. She met a woman through work, and over time the relationship grew intimate.

However, her “coming out” story wasn’t so storybook. She lost her cell phone at a Tel Aviv gay pride parade. Someone found it and called the first number on the list — her father — to report the finding of a phone at a gay pride event.

That caused a family rift, with her Orthodox mother accepting her, but her father refusing all contact. Sorek’s marriage ended, and today she lives happily with her partner and her two kids. She is also active with Bat Kol, an Israeli support organization for Orthodox lesbians.

“I have a new family,” she said with a smile.

Why remain Orthodox when so many in that community condemn homosexuality?

“We decided to stay and struggle,” said Sorek. “We want to change the place we came from.”

Added Liebermann: “It’s the identity in which I was raised.”

Choosing to remain Orthodox, the three said they have accepted the contradiction between living as out gays and lesbians, and following halachah, or Jewish law, which most Orthodox interpret as forbidding homosexuality.

“I was born Orthodox and have a commitment to halachah,” Lebovitz said, adding that “not all [Orthodox] keep to halachah all the time. I think every human being must live with contradictions. That’s part of life.”

All three affirmed their commitment to remaining religious Jews, and doing what they can to change attitudes. Until that changes, they may continue to face resistance.

Read the complete story in the jweekly here.