Trans peace activist Bex Gerber converted to Judaism and was surprised by the anti-semitic backlash from her fellow progressives. “As soon as I put on the Star of David, I was accused of supporting apartheid by my former friends on the left.” This is their story. 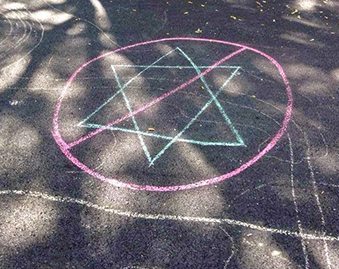 To say I chose a rather interesting time to convert to Judaism is an understatement. Considering the current political climate, I’ll admit that I braced myself for certain negative reactions to my being Jewish. Being queer, transgender, and Hispanic, I’ve had my share of slurs thrown at me.

My social group and volunteer work are where I find a safe place from the nonsense outside. If things got bad after my conversion, I had this community to turn to. Imagine my surprise, then, to find accusations and anger not from the usual suspects, but from my own progressive communities. To give a few choice examples:

1) My Catholic parents bought me a Star of David necklace to celebrate my conversion. I showed this to someone I had attended numerous LGBT events with. Their response was to call it “pro-apartheid jewelry” and said I was wearing “that star on the Jewish flag.”

2) Whenever I mention my conversion to anyone in my larger social circle, the response is never congratulations. Four out of five times, I’m immediately grilled on my views regarding Israeli policy.

When I chose to convert, my rabbi made it very clear that conversion was just a ritual. “You’re already Jewish,” he told me. “This is confirmation of what already exists.” In some ways, that’s true. I was the same person when I entered the bet din as I was when I exited the mikveh. What has changed, though, is how others see me regardless of who or what I am.

Talking about my experiences today on social media, I was surprised by how many private messages I received from other Jewish folk (converts or not) who have experienced the same. So many of us have similar experiences. Honestly, I don’t know how to respond to that. I had hoped that my experiences were unique only because I wouldn’t wish negativity on anyone. Now I’ve discovered that, in many ways, anti-Semitism exists across the political spectrum. All that changes is how bigotry manifests. But what can you say to those who have already deemed you an aggressor?