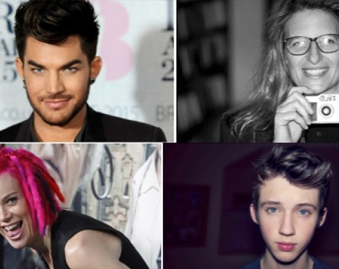 Canadian Jewish magazine Shalom Life chose their most influential LGBT Jews in entertainment. “These 10 LGBT celebrities are an inspiration to us all,” they say.  Who made the list?

Best known for his appearance on ‘American Idol’, subsequent hit pop albums and current role as the lead singer of Queen, Lambert is considered one of the first “out” gay mainstream pop artists to advocate for the LGBT community. He lends his name and time to The Trevor Project, an organization providing crisis intervention and suicide prevention for LGBT youth, participated in “Spirit Day”, and was recently awarded the GLAAD Davison/Valentini Award for making a significant difference in promoting equal rights in the LGBT community

Multi-talented actor, comedian, author, director, journalist, and Twitter favorite Stephen Fry is a loud voice in the LGBT community. Last year, he was listed number 4 on the World Pride Power list and released ‘Stephen Fry: Out There”, a two-part documentary exploring attitudes towards homosexuality on different parts of the world. We’d also like to say Mazel Tov to Fry for marrying now-husband, Elliott Spencer earlier this year.

Considered by many as one of the most influential photographers of the modern age, Annie Leibovitz has chronicled pop culture for decades and captured countless iconic images ranging from John Lennon and Yoko Ono to Demi Moore. Most recently, she shot Caitlyn Jenner’s notable Vanity Fair photo spread, the first images released publicly of Caitlyn presenting as female.

Sleater-Kinney and Wild Flag rocker and ‘Portlandia’ co-creator, Carrie Brownstein, has inspired young lesbian and bisexual girls for over 20 years. Carrie was integral to the riot grrrl subgenre in the mid-1990’s and recently reunited with SK for an album and tour, sure to empower a whole new generation.