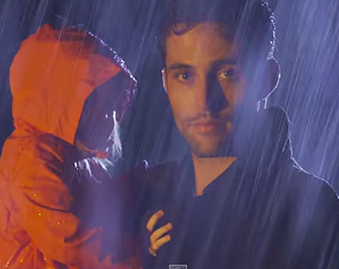 This sunday at the Smith Rafael Film Center in San Rafael, A Wider Bridge will co-host the screening of Snails in the Rain, the latest film from director Yariv Mozer (‘The Invisible Men’), as a part of the San Francisco Jewish Film Festival

Set in Tel Aviv in 1989, SNAILS IN THE RAIN follows Boaz, a linguistics student committed to his loving girlfriend. But Boaz soon questions his life when he begins receiving a series of letters from another man. They expose the inner world of their author, who is deeply closeted — and knows plenty about him, including Boaz’s past attraction to other men. The film will screen Thursday, July 31st at the Castro Theater in San Francisco; Sunday, August 3rd at the California Theater in Berkeley; and Sunday, August 10th at the Rafael Film Center in San Rafael.

“it’s a passionate triangular love story and I am very proud of it,” director Yariv Mozer told A Wider Bridge in an interview back in 2012, ” I look forward to exposing it to the public. And I am also acting in the film in a supporting role.”

“Snails in The Rain” (Israel 2013), internationally premiered at The Montreal World Film Festival, as part of The First Films World Competition.