She doesn’t run away from politics, she goes with her queerness to the extreme and constantly looking for the rejected. Aviv Shalem (AKA Asis D’Orange) in a first interview post winning the Israeli drag queen competition, about the new generation of drag queens. 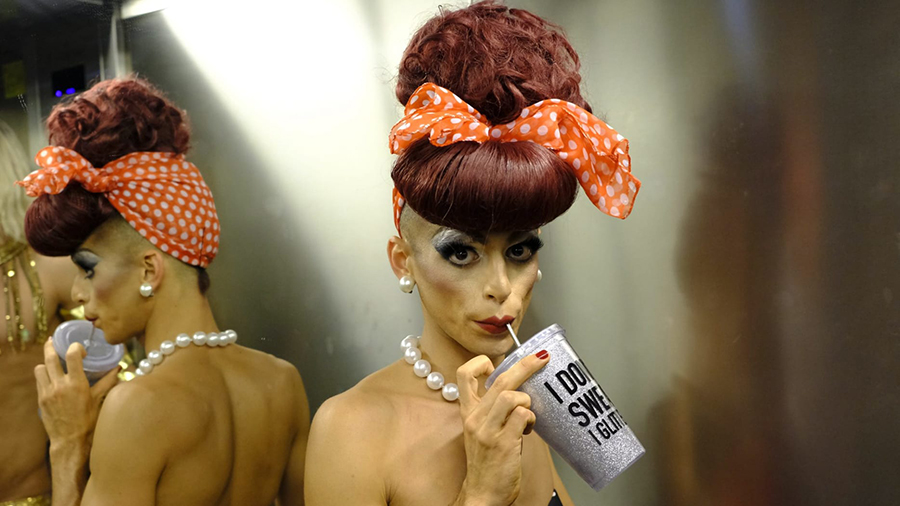 A day after winning the first drag competition of TLV Fest three months ago, it was impossible to catch Aviv Shalem. In a satirical and energetic performance of Canadian singer Carly Ray Jepsen’s “Call Me Maybe”, he excited the audience, making them stand up and cheer. But unlike the neurotic and obsessive woman who he portrayed, who took hundreds of notes with her phone number and threw them into the air in a desperate attempt to get a date, he decided to take a break from his cell phone, and from social media.

About two weeks later, everything changed. Not only did Shalem open an Instagram account, but he also became an exhibitionist animal overnight. One day he was completely naked hanging from a tree trunk in Nahal Shikma with the inscription “Climb a tree. Get a new perspective”, the next day he wandered around the Jordan River with half a watermelon. Here he was in a pink bathing suit at the beach, and a moment later he was protected under the shadow of an umbrella, wearing only a turban and a green Speedo. “The body is wonderful, and a great thing to be proud of, no matter what it looks like,” he says of the pictures. “So by chance I was born short and darked-skinned.”

In recent years Asis has managed to become a name in the young underground drag community in Israel. Unlike the drag queens who have become famous in Israel since the 1990s, the current generation is more political, more anarchist and queer. Asis grew up among avant-garde genderqueers, with fluid or complex identities, who deal with studying and breaking down of conventions, of “masculine” or “feminine” behaviors.

“It’s a generation that grew up on new cultural heroes, gender-blenders who can appear with a beard and choose aesthetics that contrast with what we call beautiful or attractive,” explains Shalem. “Sometimes people turn themselves into creatures, with completely black pupils, smeared and damaged lipstick, or a nose that looks like it’s broken or bleeding.”

“I studied in religious education, with a yarmulke and tzitzit, in the Mizrachi neighborhood in Rishon Lezion. Where Zahar Argov grew up. King Zohar, and Queen Asis,” he says and laughs.

The background he came from is also the reason why he came out of the closet only at age 21, as bisexual. “If I was gay I would not be able to get away from it, but because I am bisexual, because I love men, women and transgenders, my acceptance is more complex. A person’s gender is not a factor that indicates whether I’m attracted to that person.”

It seems that your characters are very diverse and are in constant change. Aren’t you testing a specific direction for your performances?

“I try to be in dialogue with internal voices all the time. I have both the man and the woman inside me, both the Hassidic man who eats kosher and the homosexual who dances in tight clothes on a truck. I try to constantly examine my feelings, my angers, my jealousy. It’s controlled schizophrenia.”

His many collaborations stem from the perception that he is not unusual. “I don’t think I’m so different, I don’t feel the need to prove it either, I don’t see difference as a value or an advantage. There are millions more like me, but I feel confidence in what I am – I learn and I change all the time. I love doing art with other people, and I’ll continue doing it.”