Over 2,000 residents and guests took part in Kfar Saba’s inaugural Gay Pride Parade on Friday, after stringent security demands were dropped by police. One of the organizers, 18-year-old Noga Fishman, told Ynet news, “The first Gay Pride Parade in Kfar Saba is the biggest thing I’ve ever worked on. I’m happy that I managed, along with my second family, to give pleasure to so many people and to make history.” 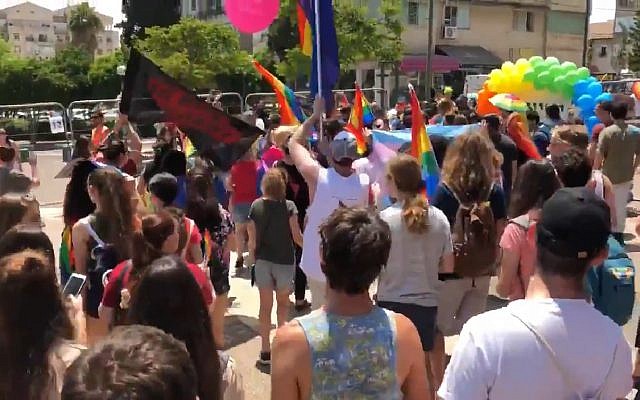 The newest event in the gay pride calendar began as the initiative of a group of 50 LGBT members of a local youth group after one of their transgender friends was attacked. They decided to organize the march to give community members a sense of security and belonging.

When the organizers asked for a police permit to hold the parade they were told they must put up two-meter-high barricades along the route and hire buses to close the streets, which would have cost about NIS 24,000.

The organizers petitioned the High Court, saying that the unreasonable financial burden unlawfully violated their right to freedom of expression and protest. Additionally, they claimed that it was the duty of the police to provide protection to the participants, and thus it was the police that should bear the costs of securing the event.

Two days after the petition was presented to the court, police walked back their initial demands and said that the march could go ahead without barriers and that police would bear the responsibility and cost of ensuring the safety of the participants.