Transsexual Rina Natan fought desperately for the chance to become a woman. Poet Mordechai Georgo Langer linked Judaism with homosexuality. We remember them and other pioneers on the eve of the Gay Pride Parade in Tel Aviv.

Rina Natan may have been born male and named Gershon Natan, but she went to tremendous lengths to be able to fully claim her identity as a woman. In the 1950s, she waged a tenacious struggle against the Israeli medical and legal establishments, in order to undergo a sex change operation. After trying various forms of passive resistance and then, in a drastic move, attempting to perform surgery on herself, which nearly killed her − she ultimately succeeded in her quest.

The heroic tale of Natan − apparently the first transgender woman in Israel − has recently been retrieved from the depths of oblivion and researched by Dr. Iris Rachamimov, a historian at Tel Aviv University. Rachamimov discussed Natan’s struggle at “Beyond the Parade,” an event held this week in Tel Aviv. The talk, held in conjunction with Gay Pride Week, was devoted to forgotten or unconventional figures in the history of Israel’s LGBT community.

Rachamimov found about 50 reports about Natan in the Israeli press from 1953-1958, which showed that she was born in 1923 or 1924 to an affluent German family in Siegen, Germany. In school, Natan excelled at music, painting and writing stories. As a child, Natan felt “a psychological need to wear women’s clothing and act female in every way,” as she once put it.

Just how she survived World War II is not entirely clear, but it is known that she spent a period of time in France, learned farming and immigrated to Palestine in 1946. In this country, she lived on a series of kibbutzim − Ma’agan Michael, Ashdot Ya’akov and Na’an − and during the War of Independence served in the Israel Defense Forces as a medic, a job she retained during her subsequent military service. 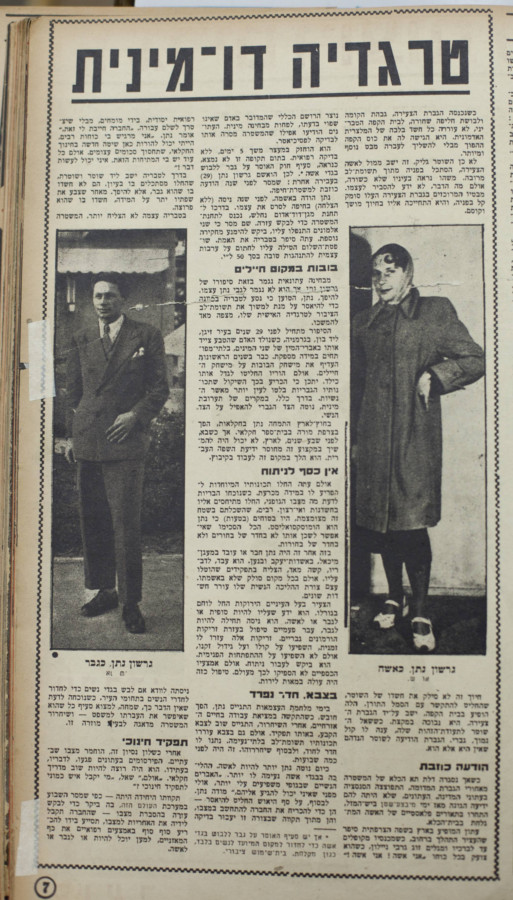 Israeli newspaper from 1953 did a story on Gershon Natan, featuring pictures of Natan as a man and as a woman. In days when the term ‘transgender’ has yet to be established, Natan was called “The Man-The Woman”