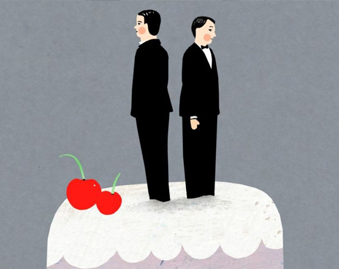 In Israel, even Jewish couples who were married outside of the country can only be granted a divorce by the Rabbinate. Thus, same-sex couples who wish to separate find themselves in a legal lacuna.

When Roy Koritschoner says he’s divorced, “People ask straightaway, ‘You were married? To a woman?’ I reply, ‘No, to a man’ – and there’s a surprised look.”

Koritschoner, 36, lives in Tel Aviv and is single according to his ID card. He married his then-partner in Canada in 2009, but the two didn’t update their family status in the Israeli Interior Ministry’s Population Registry. After they separated, they dragged the ministry into the family court in Tel Aviv, which ruled last June that, “Plaintiffs and respondent agreed to a declarative ruling that will state the parties are not married.” To whom – each other? To the Interior Ministry? Is the ambiguity deliberate?

In strictly legal terms, this was not exactly a divorce, just as it wasn’t a marriage from the state’s viewpoint. But the imprecise terminology is almost unavoidable, given the legal complications in the country over same-sex marriage – and even more so over its dissolution.

“Civil marriage does not exist in Israel, and the laws of marriage and divorce are subject exclusively to the laws of personal status, so that one can be married or divorced only in accordance with halakha (religious law),” attorney Judith Meisels explains in a forthcoming article for an anthology on LGBT rights in Israel. Over the years, she adds, Israel has registered civil marriages performed outside the country, “thereby creating something of a solution for those who cannot or do not wish to be married according to halakha.” This practice, however, does not address the dissolution of such marriages.
Civil divorce in the country is reserved exclusively for cases where partners of two different religions are involved. “Heterosexual couples from the same [religious] community are compelled to be divorced in a religious court of the community to which they belong, even if, for ideological reasons, they chose to be married in a civil ceremony,” Meisels notes. A same-sex couple cannot obtain a divorce in a religious court, as the religious establishment does not acknowledge their marriage to begin with.