In June, A Wider Bridge brought Evan Wolfson, founder and president of Freedom to Marry, the campaign that won marriage in the United States, to Israel. As part of the media coverage for his arrival, Wolfson gave an interview to Israeli paper Maariv. Read the interesting article. 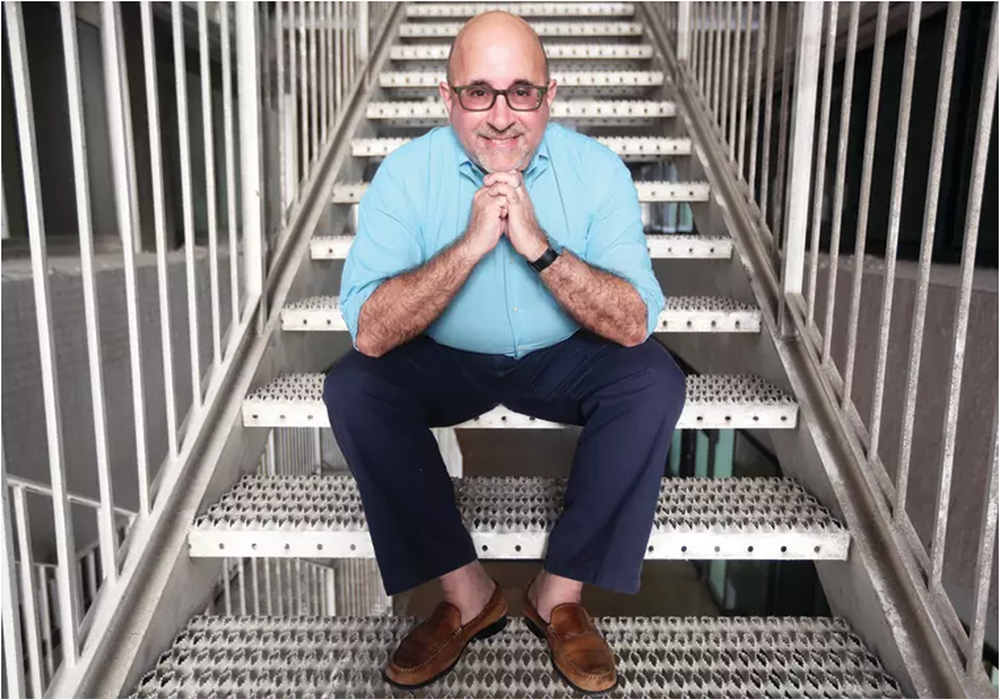 “Somehow it came out that of all my super-techie workers, I was the first to see the court’s decision on my phone,” Evan Wolfson recalls the day his fight for same-sex marriage in the United States ended with a resounding knockout.”When I saw it I blurted out: ‘God, we won!’ and suddenly I was afraid. Because if I say it, it makes it real. I was afraid for a moment that maybe I didn’t understand right or something. Of course, a second later my employees got it on their phones as well, and we all celebrated and wanted to get the news out.”

This news, which made headlines all over the world, took place on June 26, 2015. The Supreme Court in the United States decided to permit gay marriage in all the states of the United States. Wolfson, known worldwide as the “godfather of same-sex marriage” , saw this as a personal victory, and rightly so. This is because the Freedom to Marry movement, which he founded in 2003, was considered the spearhead in the struggle for same-sex marriage. This week he arrived in Israel for Pride Week with the help of Free Israel movement, American organization A Wider Bridge and the Aguda, the Israeli National LGBT Task Force. “A victory is not in your pocket until it actually happens,” he says in a conversation with Maariv magazine. “We were hopeful that we created a suitable climate, and had the court straightened out, but clearly there was the possibility that it still might not happen.”

Did Obama call to congratulate?

“Biden [then vice president Joe Biden] called me. I worked for him when he was a young congress nominee in 1976, so we had an early acquaintance. He thanked me and said that it was important for him to say that this is an important moment not only for members of the gay community, but also for the victory of general justice.”

Is that also the feeling within the community? That this is a general victory?

“Absolutely. I think that the decision brought a great wave of joy all over the United States and around the world, because it was an example of a government that keeps its responsibilities and promises, which, as we know, doesn’t always happen. But when it happens, it’s something to celebrate, and it also shows the power of the belief that things can be changed, even when there is great difficulty and you are in a terrible place and the state doesn’t meet what it had promised and there are challenges, you can still win if you persist.”

Is there a fear that your fight for same sex marriage in the United States could be renewed now?

“The Trump administration’s scorn and irresponsibility are almost beyond words, but of all the things we have to worry about in this administration – what we don’t have to worry about is that they take away the achievements of the LGBT community and specifically the freedom to marry. We did not receive this right from the president. We received this from the change of hearts and minds and through the legal and political apparatus.”

But he can try to sabotage your achievement, for example by appointing hostile judges.

“Yes, but when we won the Supreme Court in 2015, we won two Supreme Court cases with 70 different rulings from all kinds of judges across the United States from a variety of courtesies. We already won the public’s opinion. It jumped up from 27% support when I started working on this issue to 63%, and surveys from two weeks ago show that support continues to grow. We even have broad support among Republicans or conservatives, and of course over a million LGBTQ people who are already legally married in the United States, so that of all the things we’re working on today- this is not the first thing.”

At the level of personal security, is the gay community in the United States afraid of harassment now, as in the case of Jews or Muslims, for example?

“I think that there’s a certain concern and some justified concern, because after all there are still opponents, and they have been strengthened by the Trump administration and its deputy, Mike Pence, though perhaps not directly. There have been anti-LGBT measures by all kinds of lawmakers throughout the country; there’s some noise in the administration, but they also skipped opportunities to hurt us. So of course, there is concern, but I am mainly concerned about the general threat to the United States and the overlapping communities, not necessarily directly against us.”

Later in 2015, after the echoes of rejoicing in the court’s ruling, Wolfson decided that the time had come to close the movement he had founded, after it had achieved its goals. Since then he has focused on attempts to promote gay marriage in other countries.

Countries like Russia or Chechnya are using hard-line violence to suppress LGBT people. Is there anything to do there?

“These are enormous problems that will not be resolved by a single individual or organization, or even one country, but it is absolutely critical to reject these acts and declare that it is genocide, oppression or severe discrimination when this happens. First, it’s necessary to shine a spotlight on what’s been done in these countries and then to call on international organizations such as the UN to exert pressure on them.”

Would you be willing to travel to Russia yourself and work there?

“I’m sure it’s going to be scary, perhaps irresponsible and perhaps might not end well. There is room for such activism as well, but it is equally important that we support them from the outside and do the work that we have to do, because in the end it will have an impact over time. Even in Israel, there are organization that quietly provide help to refugees from Russia or Chechnya, and urging the Israeli government to call on various European countries to provide them with shelters. These countries have opened up their doors to them more than the United States and provided them with welfare and support. I know some international organizations that help smuggle and even hide some of these persecuted. Dozens of them have already fled.”

Do you see a situation in which countries will regret supporting LGBT communities?

“Of course. We know this from history. Terrible things can happen, and it is our responsibility to prevent them. Democracies do not protect themselves. This is a lesson that Israel knows, that Europe knows and that is a lesson that the United States is currently learning about. When you ask if there is a scenario where a particular country slides backward on issues of LGBT rights and minorities, the answer is: Absolutely, and this has happened more than once. That’s why it’s so important that we in America to do our job to bring our country back on track. And it begins with the recognition that it’s not there right now. ”

Wolfson (60) lives in New York and is married to his partner Cheng Hei. He is ranked by Time magazine as one of the 100 most influential people in the world. According to him, the United States has something to learn from Israel, and especially from Tel Aviv, about LGBTQ rights. “Tel Aviv is the face of Israel’s commitment to democracy, openness, pluralism and self-criticism, and all these important values ​​of human rights,” he says. “It’s the face that people around the world cheer for. On the subject of marriage, we may have preceded you, but there are many aspects of LGBTQ rights in which the United States lags behind Israel – for example, in Israeli law, it’s expressly and legally prohibited to discriminate against people on the basis of sexual orientation. In the U.S. it exists only in local legislation, but we do not have a clear law that forbids me from firing someone or denying him services in a restaurant just because he is gay. The big difference now is, of course, the subject of marriage, but that’s because we have civil marriage and Israelis don’t. That is something I believe Israel needs to correct, but this is not something that is specifically related to LGBTQ. It’s a problem that Israel has to deal with generally. It hurts mainly women, by the way, because of the issue of divorce.”

When it comes to freedom of expression, Wolfson argues that everyone should be allowed to express his opinion no matter which side of the political divide he comes from. If less, he says, there will be a blow to democracy. “I think Ann Coulter is terrible and her opinions are wrong and ridiculous, but she has a right to express them and people have a right to hear them, and she has the right to demonstrate nonviolently like everyone else. Silencing another person because you disagree with him – it’s a terrible thing. Where does it end? ”

Where does the line go?

“Personally, I think we are all allowed to speak and hear, but the government must not dictate to us what to say and what to hear.”

“It is fascinating to see how a man like Evan repeatedly emphasizes Israel’s strategic place in the global struggle for freedom of choice in marriage,” says Inbar Oren, director of the Havaya Center for civil weddings for the Free Israel movement. “He reminded us all of why we are here and how much influence we have in the third sector and in ourselves as an area movement in struggles of this kind. The American struggle only illustrates the ability of a sane majority with long-term vision and perseverance to achieve its rights. We will not stop until we will make the American marriage revolution here also”.

“The story of the struggle for marriage in the United States through the eyes of Evan Wolfson provided us with broad inspiration and spirit for the LGBTQ community’s struggle in Israel,” says Chen Arieli, chairman of the Aguda. “His visit and the immediate connection with the local community proved again that our community is international and united.”

“If I had to summarize the way we, the LGBT community, have managed to get from times of oppression and violence to this day, it is because of hope, clarity and perseverance,” Wolfson concludes. “It took us more than four decades. People have worked hard for a long time to get to this. But it began with hope. You must believe that things can change. It is impossible to begin with statements like ‘the situation will never change’ or ‘it’s never going to be better’, because then you allow a lack of action.”