The Israeli Medical Association published an official position paper on the adoption of children by LGBT couples and determined that LGBT parents are entitled to adopt children just like heterosexual parents. “End discrimination based on sexual preference in this matter.”

“Many studies from recent decades have unequivocally demonstrated that children growing up in LGBT families are healthy, happy, and successful children just like children growing up in heterosexual families,” the letter said. “As professionals, we call upon the Ministry of Welfare and the Ministry of Justice to adopt the prevailing view among professionals, according to which LGBT parents are empowered to adopt children just like heterosexual parents and to end discrimination based on sexual preference that exists on this subject.”

The letter states that sexual orientation of the parents is irrelevant and has no influence whatsoever on people’s parenting and that various American Medical associations have also made a clear statement about adoption by LGBTQ couples. “American Academy of Child and Adolescent Psychiatry published its position in 2009, The American Academy of Family Medicine did it in 2002, the American Medical Association (AMA) in 2004 – all published a determined position in regards to allowing adoption for LGBT couples.

“The criteria that the authorities should look at is the benefit of the child and the ability of the adult who asks to be a parent, and not sexual orientation,” the letter says. “Ability to parent is measured by the ability to provide to the child basic physical needs, emotional stability, love and security. The benefit for a child requires that a person who asks to adopt will be valued according to this criteria.” 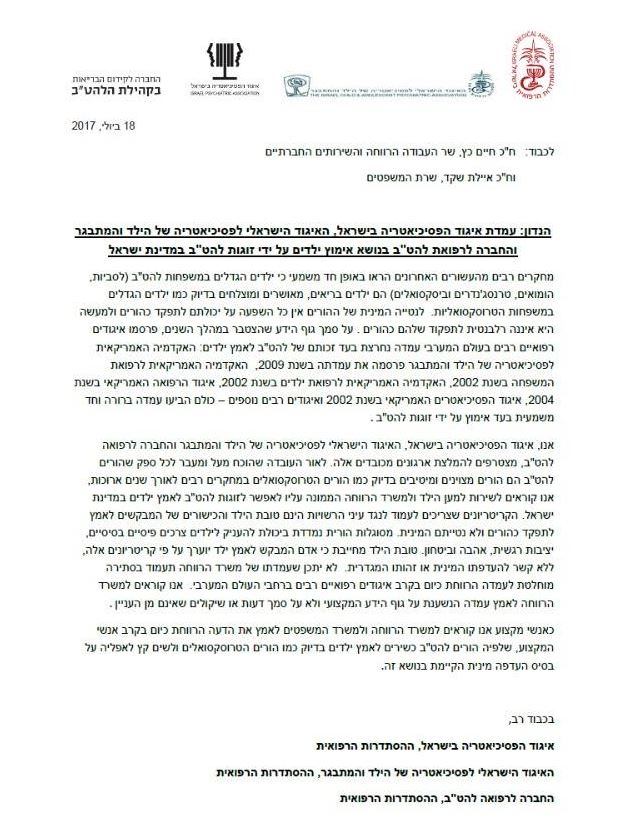