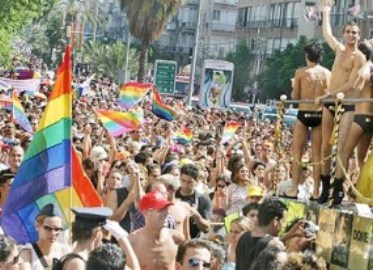 As in much of the world, it is the season of gay pride in Israel. In June, I marched in the Tel Aviv Gay Pride Parade, a celebration that has the look and feel of a gay parade in a major American city, with tens of thousands of people, politicians, all sorts of exotic costumes, and floats with scantily-clad male dancers. In a few weeks there will be a very different kind of gay march in Jerusalem, a smaller yet more serious political affair, with little exposed skin, as befitting the more conservative and religious character of the city.

These two parades are outward manifestations of an Israeli LGBT population about which most American Jews have little knowledge. As someone who has spent much of the past year looking for ways to build bridges between the U.S. and Israeli LGBT Communities, I believe that we in the United States first need a clearer understanding of the size, strength and diversity of the Israeli LGBT population, the successes they have had and the challenges they face, and the opportunities that could be created through stronger ties.

To understand the complexity of the Israeli LGBT community, it helps to look separately at Tel Aviv and Jerusalem.

In Tel Aviv, one is immediately struck by how large the community is. There appear to be gay people everywhere, and gay families are visible and flourishing. I would imagine that only New York and Los Angeles have a larger LGBT Jewish community than Tel Aviv. To put this in perspective, in 2009, the San Francisco Jewish community was excited to get a contingent of about 700 Jews to march together in the San Francisco Pride parade. In Tel Aviv, estimates put the number of folks walking in the parade at about 40,000, with, of course, most of them Jewish. By the time we got to the beach, there were about 100,000 people out celebrating. By any measure, that is a lot of Jews celebrating Pride.

Gay people are starting to become a political force in Israel, and a class of strong gay political leaders has emerged. Nitzan Horowitz, the one out gay member of the Knesset, is seeking to build a new liberal coalition in Israel dedicated to human rights, civil liberties and freedom for all of Israel’s citizens. On June 1, MK Horowitz invited many of the leaders of Israel’s LGBT organizations to the Knesset for a historic session on gay pride, where they were invited to share their concerns and their stories with leading members of the Israeli parliament.

There are many more LGBT politicians at the local level. In Tel Aviv, the gay community is stronger than in most cities of the United States. The new Tel Aviv LGBT center is funded by the municipality. Etai Pinkas was the first out gay person to be elected to the Tel Aviv City Council, and the Council now inlcudes two out gay members, Yaniv Waizman and Yoav Goldring.

Tel Aviv’s main LGBT organization, The Agudah, has been around for decade, and has incubated some of the most important new organizations on the gay scene, including Israeli Gay Youth, which now runs more than 40 support groups for young people not only in Tel Aviv, but all over the country. Another emerging organization is Hoshen, a speakers bureau that has trained more than 300 volunteers to tell their personal stories to teachers, social workers, military personnel and high school students.

Beyond this very visible mainstream community, there is a greater diversity that is often hidden. On my most recent trip, I met with two of the leading transgender activists in Tel Aviv. Nora Grinberg told me about the progress the trans community has made in Israel, but also stressed ongoing issues such as access to appropriate medical care, and the fact that Israel still requires evidence of gender reassignment surgery before they will change the gender on your ID card or passport.

I had a fascinating conversation with a young trans activist named Shuki Alexander, who began his conversation with me by saying, “You need to know that I am not a Zionist.” I assured him that I knew more than a few folks in San Francisco who shared his point of view. Alexander was one of the organizers of a demonstration that preceded the parade, where about 400 people gathered to insist of the need for the LGBT community to align in solidarity with other progressive and radical movements.

In Jerusalem, gay life is not nearly as open, and the tension between the gay community and the ultra-Orthodox Haredi community has been a significant problem. Jerusalem Open House is the city’s flagship LGBT organization, running various support groups, and HIV testing program, and focused on creating a national political agenda for the community to unite behind.

Perhaps the most interesting development in recent years in Israel’s LGBT community has been the growth of the LGBT organizations that have developed from within Israel’s Orthodox community, mainly in Jerusalem. Havruta is the men’s group. It started with 10 members just two and a half years ago as a part of Jerusalem Open House, and now has more than 300 members. Bat Kol is the Orthodox lesbian group, now with more than 200 members. Shoval is a religious LGBT speakers’ bureau that also staffs a hotline one day a week at the gay center. And many of the calls they get come from within the Haredi community. The Havruta website now gets more than 10,000 hits per month. The community also has both a youth group and a prayer minyan. These numbers are now too large for Orthodox leaders to continue to claim that homosexuality does not exist in their communities, or that it is just a tiny number of “deviants.”

In Tel Aviv, many of Jerusalem’s Orthodox LGBT leaders walked as an organized group in the Pride parade. K’hilalah Datit Ga’ah, their banner proclaimed. Proud Religious Community. The group had a car with a sound system on top, with the song Mashiach playing. Still, while the leaders and some of the members of these groups are “out” within their larger communities, many others are not, or are in various stages of that process. Coming out as an Orthodox LGBT Jew in Israel is not easy, especially in Jerusalem.

In Israel, I met an 18 year-old Orthodox young man, Yosef. Yosef told me the story of his coming out, to himself, to his mother, to his community. He told me about the debate in his family about whether he should try the conversion therapy, and the ultimate decision that he would not. And he told me what a difference it had made in his life to be able to attend a support group with other gay orthodox young people.

In a country in which the Orthodox communities are by far the largest of the religious communities, and where they have so much political power as well, the importance of these developments cannot be underestimated.

The Power of Tragedy

Despite the richness of their political, cultural, social and religious infrastructure, what brought LGBT Israelis to the attention of the American mainstream was the [tragedy in Tel Aviv]http://en.wikipedia.org/wiki/2009_Tel_Aviv_gay_centre_shooting) last year, when a masked gunman entered a meeting of a Tel Aviv LGBT group at the Bar-Noar and killed two young people. As a result of that tragedy, Ayala Katz, the mother of Nir Katz, one of those murdered, took on the role of chair of Tehilla, the Israeli organization for parents of LGBT children. I met Ayala Katz, and this is a part of what she said to me: “I loved my son…I accepted him… I welcomed his friends into my home…And I thought that was enough…But when he was murdered I realized it was not nearly enough. So now I want to help other parents, and make Israel a better place for all the children who are like my son.”

The Jerusalem Gay march will take place in a few weeks, having been moved from its usual June date so that it would be close to the one-year anniversary of the shooting at the Bar-Noar in Tel Aviv. The march will have a new route this year, ending at the Knesset. A few weeks ago the Jerusalem police refused to give permission for this new route, insisting that the march follow the same path down King David street that it had in prior years. But just a few days ago, we learned that the police have relented, and approved the route to the Knesset. Yonatan Gher, Jerusalem Open House Executive Director said, “The parade route to the Knesset, on the anniversary of the murder, is the proper route to symbolize what the parade is demanding – full equal rights for the gay community in Israel.

He added “On this day, the message that will be sent from Jerusalem to Israel and the world will be a message of accepting the other, of celebrating the human diversity that makes up this unique city, the capital city that is holy to all of us.

Ayala Katz will be marching. She said “The message sent today to all of Israel’s citizens is that threats of violence are not rewarded. The parade on the eve of the murder’s anniversary is granted full legitimacy today, and we, as parents, will march for the benefit and the future of our children.”

This article appeared in ZEEK: A Jewish Journal of Thought and Culture. Read the article on ZEEK’s website.