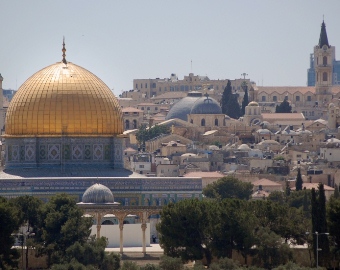 A young British traveler reflects on his first night in Jerusalem and an unexpected encounter. 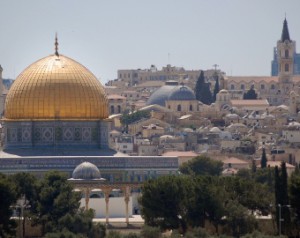 On my first night in Jerusalem, the holiest city in the world, I found myself being hit on by a gay Israeli goat herder.

What happened that night was that our host had taken us to a gay party outside the student union in the centre of Jerusalem, beneath the walls of the Old City. Our host, the two of us, and a few of our host’s friends walked the ten minutes through a few streets of the modern face of Jerusalem, with its lightrail system (the first in Israel), fashionable clothes shops and high-end bars to the student union.

It was still early and the grassy area outside where the action was to take place was still being set up, with a few people sitting around chatting. We had dinner upstairs in a mid-range, probably too expensive for us travellers, restaurant. I had an eggplant salad, if you’re curious. I’d give it 6/10 at most. I’m not even sure I like eggplant.

Two hours later we were back downstairs listening to terrible music; the others were dancing to it or off elsewhere doing something. For whatever reason I was left sitting on my own on the wall, plastic cup of cheap beer in hand. There was a guy and his friend sitting a few feet away who had been there about ten minutes. I’d noticed him looking over at me a few times already. His friend got up and headed to the bar.

“Lighter?” He said with his bad English. He pointed to his cigarette. Then he moved over to sit next to me.

“No, sorry. I don’t smoke. I can ask one of my friends though,” I replied.

“No, it’s okay. I already have it actually. I just wanted excuse to talk to you.” Being the worldly sage I am, I knew what this was going to be leading to.

I think he said his name was Leo, or Leor, or something. He was kinda attractive I suppose, and he was definitely gay: a stud in his ear, a small lip piercing, smart white shirt with a couple buttons undone to show off the top of his chest and his gold necklace. And he had the confidence, clearly, to go up to random guys and hit on them. He’d have no trouble going home with someone tonight, but that someone was not going to be me.

I went with it a for a while because I felt flattered and even in the moment I realized this was going to be a cool story to write. He told me he was in Jerusalem only for a few days; his real life was in a village in the hills working as a goat herder.

A few minutes later the music stopped. Then the drag show started. We sat together cross-legged on the grass to watch what was another new experience. I thought the whole transvestite thing kinda cool but those in the know said it wasn’t that great. I guess sometimes it’s easier to enjoy something if you don’t know anything about it.

After the miming to ‘Bad Romance’ by Lady Gaga was done with, we headed back to our spot on the wall away from the gaze of everyone. I caught my travelling friend’s eye at one point and met his raised eyebrow with a grin.

“Er, American dramas can be good. But I love British comedies. What about you?”

Hang on. Back up. This goat herder from some teeny Israeli village in Jerusalem on business for a few days – probably getting best prices for goats – happens to know about, and even like, the same English soap opera that my nan has watched every day for the last fifty years.

Evidently my face gave away my thought process because he said, “Yeah. Don’t ask.” Before I could ask anyway, he said, “Do you wanna go somewhere more private?”

I let him down gently. Or at least I think I did. I said I have to get to know people before I sleep with them and that I was leaving tomorrow so it wouldn’t work. He said he understood and asked me to come find him if I changed my mind. I never did change my mind but it was an interesting first night in Jerusalem nonetheless.