The Justice Ministry clarified this week in a Knesset debate that it opposes surrogacy for gay couples. It’s easy to blame Minister Ayelet Shaked, but the truth is that behind her are the prime minister, the Likud ministers, and the leftist Knesset members who line up with the darkest forces in our politics. Gal Uchovsky tries and fails to understand them.

Israeli Same-sex couple Shachar Exmit and Gabriel Avigad got married last week. Shahar is a senior figure in the Tel Aviv municipality. There is, of course, no formal value to this ceremony; In order to register as married on their identity card, Shachar and Gabriel will have to get married in Cyprus/ Denmark /Canada, and then go back to the Interior Ministry that will “have no choice but to” register them as a married couple.

Naturally, the next step is to become parents. It may sound conservative, some may call it heteronormative, but most gay people in Israel want to end up finding a partner and start a family. The problem is that in order to have a kid, Shachar and Gabriel will have to embark on a long, exhausting and extremely expensive journey: about half a million shekels that they will take as a mortgage from the bank. Other young couples could buy themselves a house with such a mortgage, but Shahar and Gabriel would have to continue to rent an apartment.

No matter where you stand on the question of surrogacy for gays, you have to admit that it is a demanding, expensive and difficult move that requires a lot of effort.

Another example, Maor and Tiran Elimelech-Ronen: They have been married for three years, both of whom hold bachelor’s and master’s degrees and are event managers. In order to make the money for surrogacy, they moved to an apartment with a roommate a year ago, and at the same time started a crowdfunding campaign on the Internet. All their savings, up to the last penny, are invested in the process that has recently began with Tammuz agency in one of the Balkan countries, where surrogacy is much cheaper than in the United States. Why? Because they have no money!

I expand on the stories of Shachar, Gabriel, Maor and Tiran, four perfectly normal Israeli men, to emphasize that the issue of surrogacy for gays is not something unusual. This issue, which this week returned to the headlines following the stormy debate in the Knesset Health Committee, is central to the lives of thousands of gay men in Israel. And the strange coalition that was created against surrogacy in Israel is unfortunate and annoying, because some of its participants do so in my estimation for the wrong reasons – or simply because they are not fully aware of the meaning of their actions. 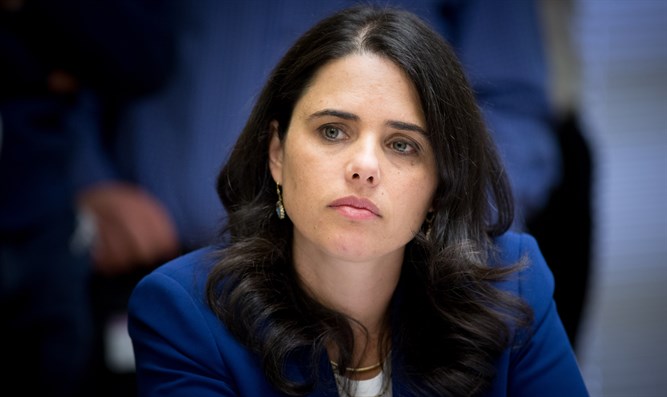 This week, the health committee convened to discuss surrogacy for homosexuals following a High Court of Justice ruling that stated that discrimination against homosexuals in this context is irrational, immoral, and illegal. It’s difficult to explain how outrageous the position of the Ministry of Justice was, the way it was represented at the event. Again it turned out that Ayelet   [Minister of Justice] is the most dangerous enemy of gay men in Israel; this woman, who has a lot of courage and determination when it comes to war in the High Court, in regards to national law and many other matters, consciously chooses to adopt the darkest positions on any LGBT issue.

Although Shaked is committed to her party’s position, she can’t hide behind rabbis or Motti Yogev and the Smortitches. It’s a fact that her partner, Naftali Bennett, manages his affairs in the Education Ministry on this issue in a completely different way. Shaked is presented as brave, wise, standing on her own. If so, I must conclude that also in the LGBT matters, she does what she believes in. Why shouldn’t the minister try to adapt her actions to the environment in which she lives? to her neighbors? to the views of the social circle she encounters when she goes to the grocery store?

But enough about Shaked. Behind her hide many others, including all Likud ministers and Knesset members, headed by the prime minister. In the last elections Benjamin Netanyahu published a video in which he called on members of the LGBT community to vote for him. I will never understand what was the prime minister thinking – that one can be proud of MK Amir Ohana, a gay man with two children (born via surrogacy), and then allow the Justice Ministry to bring such a position on surrogacy to the Knesset? That you can invite Moshik Galamin home to interview you on of how difficult it is for you – and then turn your head the other way when he wants to bring a child into the world?

What about the poor ministers who come to pride parades to be photographed but in practice don’t do anything, or worse? What kind of a person comes to Pride Parade, as if to embrace us, and then goes silent when the government in which he is serving announces that gay men are third-class citizens? Even Bennett himself doesn’t get to have medals. He is the head of Shaked’s party, he can constrain Shaked’s steps, or at least call her to order, even in private. Incidentally, both of them should remember that in the next elections, when they want to appeal to a secular audience, there will be those who will remember and mention Shaked’s actions.

We were left with the holy Yael German, who cried out to Heaven and mentioned that the Prime Minister had already agreed in the previous term to allow surrogacy for gays. And the members of Kulanu party, including chairman Eli Alalouf, who objected to the position of the Justice Ministry. Although they didn’t get on the barricades but released very soft support statements,  at least they postponed the vote and promised to try to act behind the scenes.

The opinion presented this week by the Justice Ministry’s representative on the health committee is outrageous and irritating because it does not say bluntly what the Moti Yogevs say: Gay people are perverts, they don’t deserve to have children. No, the Ministry of Justice spices things up with arguments brought from the feminist wing of the discourse. Suddenly there is something about this feminism. Oops!

Ayelet Shaked’s representative claimed that if surrogacy would be allowed for gay couples, four danger issues would arise:

The fourth item is really a parody, especially when one takes into account that the Ministry of Health presented very similar views to those of the Ministry of Justice. Yaakov Litzman [Minister of Health], the representative of the sector in which black economy flourishes and evades taxes, fears that money will pass under the table. What a laugh.

Now seriously: these arguments are actually the arguments of those who oppose surrogacy in general, which is usually Knesset Members from Meretz and from the Zionist camp. Even when they do not blatantly criticize gay surrogacy, they express their opinions behind the scenes. Perhaps the time has come for Merav Michaeli, Tamar Zandberg and their ilk to reconsider their position.

The traditional feminist position is that surrogacy is the exploitation of weak women and therefore it must be forcefully resisted. The problem is that when they support not allowing homosexuals surrogacy in Israel with silence, they don’t really help weak women. After all, women in the Third World are weaker than Israeli women. If surrogacy is permitted here, at least it will be possible to demand and even supervise much more closely and ensure rights. Moreover, the medical services in Israel are much better than those in India, for example.

In Israeli culture, which sanctifies parenthood, it’s hard to complain to gay men who also want to become parents. As you recall, Israel doesn’t allow adoption, and even when adoption will be possible, the options will be meager. Therefore, when feminists – most of whom are left-wing women who believe in social equality – place themselves against gay surrogacy openly or with tacit consent, they create a situation where only rich gays can have children. Only those who have (or can scratch from somewhere) half a million shekels will be parents. Not to mention that the opposition to surrogacy puts you, whether you like it or not, in the Smotrich camp. Yuck, no?!

What reason does Michaeli and Zandberg have to join hands with the dark forces of Shaked and Litzman? What reason do they have to agree to ugly discrimination against gays? Why shut up when it’s part of a bigger move, in times when the ultra-Orthodox, the rabbis of the religious seminaries and their representatives are waging a full-scale war against the community in an attempt to deprive it of all its legal achievements-and more than that, try to bring back the discussion of the illegitimacy of existence that is not heterosexual?

The fight for the right to marry remains ideological and symbolical. Technically it’s solvable: Get married abroad and then register in Israel officially. But the struggle to be a parent is completely real, painful and very frustrating. It’s not logical that only rich gay men can have children, it makes no sense that the Smotrich values ​​scale will determine gay life in Israel. It’s not possible that only straight people will be able to start a surrogacy procedure in Israel. And in war, as in war, those who don’t join the struggle as allies turn themselves into enemies. Since elections will soon be held, all the lovely candidates should pick a side. In my opinion, there are three or four hard-line seats here that can roam between parties precisely because of this issue. Please note all campaign builders.