If one man links Israel’s pop music scene to the LGBT community’s emergence out of the closet, it’s the enigmatic Offer Nissim. Ha’aretz sheds light on one of the most intriguing and secretive figures in Israeli culture. “Offer Nissim embodies the story of the maturing of the LGBT community of Israel in general, both accompanying it and defining it.”

Nissim no longer wants to be accepted: he’d rather keep his distance. He doesn’t like publicity and he isn’t prepared to be interviewed. He believes the mystery only contributes to his legend, and he is right. 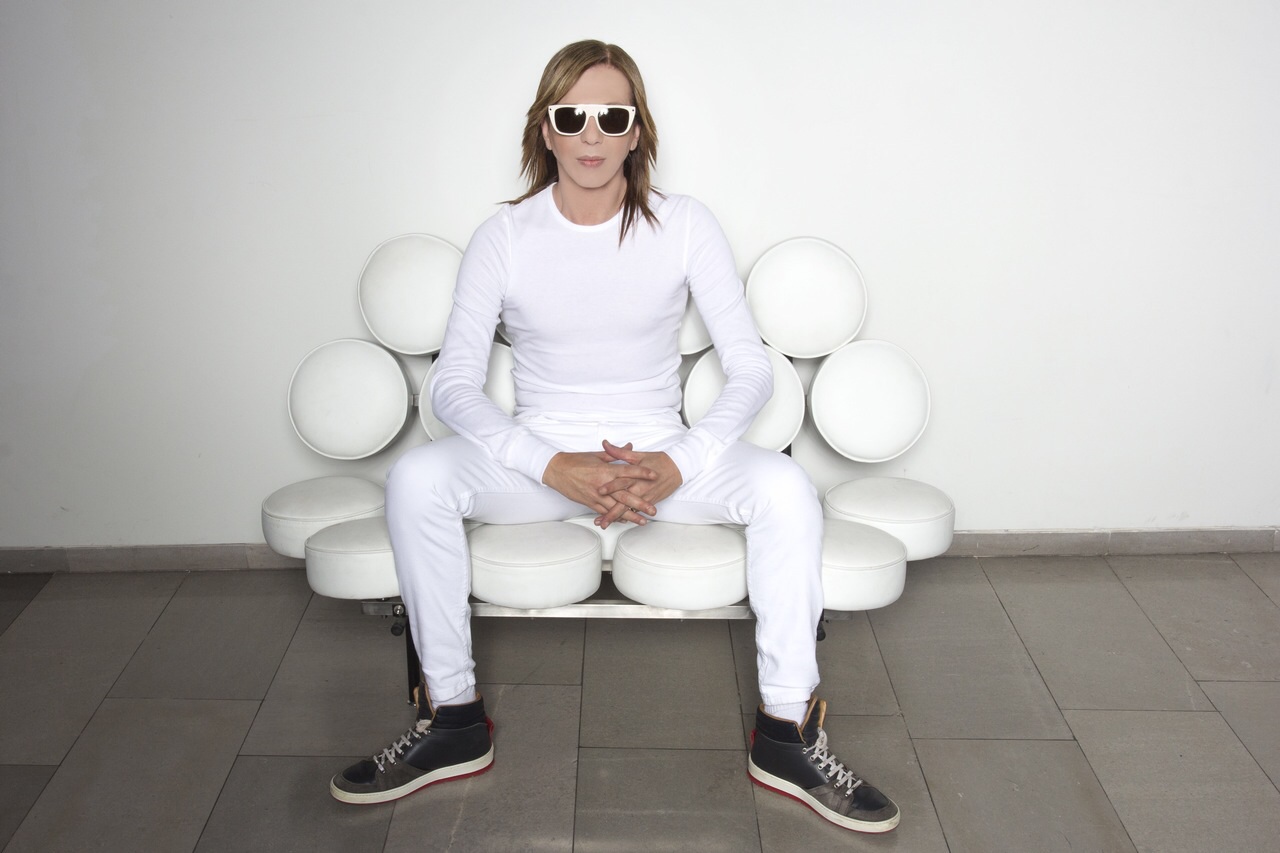 Very few people know the story behind DJ and music producer Offer Nissim, the major pioneer of the LGBT culture and clubbing in Israel – even before they called it a culture.

The colorful and gender fluid musician keeps away from the fans who hunger for every unavailable scrap of information. He continues to shut himself up in his apartment and concentrate on music. The few people lucky enough to visit him will find heavy, drawn curtains; he always lives in the dark “like a vampire.”

He opens the door wearing a thin robe and high heels. He sometimes flits into the neighborhood café. Anyone who knows the raucous Nissim at the turntables will not recognize the bashful type who emerges after the microphones are turned off.

No coming out was needed

He was born in 1964, the eldest of three children in a family of Iraqi origin. At age 11, he was already editing the weekly hit parade on the blackboard in his classroom. Later, he strung cables between apartments in the building where he lived and operated a pirate radio station, broadcasting to neighbors for an hour a day.

There was no mistaking his sexual identity. “There wasn’t a [single] moment of coming out of the closet,” relates Shimon Shirazi, a well-known gay parties producer and an old friend of Nissim’s. “There wasn’t one of those conversations because there was no need. With him it was clear from the outset. It was enough just to look at him.”
Another person who is close to Nissim relates: “Today his family is very proud of him. Of course there were difficulties, but he always had support from his home.”

As though being born homosexual wasn’t hard enough, Nissim also ignored the dichotomy between masculinity and femininity, an attitude that in its day was incomprehensible. “He was always a colorful, showy gay, when he wasn’t even out of the closet,” says Shirazi. “I loved to look at him, out there, going boldly down the street, not giving a damn, ignoring people’s comments.”

To this day Nissim maintains an androgynous, subversive persona, speaks about himself in the feminine and wears women’s clothing without relinquishing his masculine identity. Together with Shirazi, he is responsible for a widespread and amusing phenomenon in Hebrew culture: “Ohtcha” language, the slang and intonation initially identified with effeminate gayness that is now also common among straights.

Nissim’s musical career started at the Theater Club, on Tel Aviv’s Mendele Street, in an underground space laden with mirrors. “That was the underground,” says Shirazi, “because the gay scene at that time was very boring, exactly the opposite of today.” Nissim was a fixture there from his first moment in 1979, when he was 15 years old. He was employed as a deputy barman, until one night when the place was stuck without a DJ. Nissim seized the opportunity, ran home, packed up his records and rushed back to the setup. He stood there petrified. “My hands were shaking,” he later recalled, “but I did it. I won them over in one second.” He spun them the British synthpop duo Soft Cell and OMD’s “Enola Gay,” and from then on they were his. People came to hear him spin, to see him dance at the turntables with exaggerated moves, talk into the microphone in many accents and join customers on the dancefloor. Evenings began with the call: “Gays and lesbians!” and ended with the ABBA song “Thank You for the Music,” which became an anthem.

Dana’s up, Dana’s down

The most significant professional relationship to have come out the Theater Club was that of Nissim and Dana International, who was still called Yaron Cohen then – “a kid we took in from the street,” in Avneri’s’ words. “It was a kick, dressing him up in women’s clothes and putting him on the stage. Today this is called ‘drag,’ but it was simply an attempt to imitate Yizhar Cohen in ‘A-Ba-Ni-Bi,’” the winning song in the 1978 Eurovision.

Yaron Cohen, who then just a teenager, quickly became an integral part of the Theater Club bunch. He and Nissim shared a sense of humor, narcissistic and eccentric personalities, and the same gender fluidity, but Cohen-Dana went a step further.

Dana was Offer’s creation, say friends. Shimon Shirazi adds: “Dana’s persona is very powerful, full of charisma, and Offer was able to identify this as raw material and transform it into a creation.” After years of aiming for center stage, Nissim’s intuition told him that there was something here bigger than he was and he made way for it, while reinventing himself as a producer and director.

Nissim produced International’s breakthrough debut, “Saida Sultana,” which exposed her to a general audience thanks to radio broadcasters Didi Harari and Offer Nachshon.

In recent years, Offer Nissim’s career has sailed along calmly and steadily. It was enough to see the shining eyes of the thousands of fans in Pavilion 1 at the Tel Aviv Convention Center last Hanukkah, for the launch of his new album, “Love.” Even Rita, one of the country’s most successful singers, came onstage as a surprise, to delirious screams from the masses.

Outside, security guards could not hold back the crowds and fences toppled over. Gays and lesbians and transgender fans on towering heels jumped over them to forge their way into the building because, “Ofra has already come on.” Five thousand fans eventually crowded into the space, most of them shirtless, dancing in ecstasy.

Five years ago, Nissim conquered another personal Everest when he was chosen to record a remix for Madonna. The recordings became the official versions she used in a tour. “He always said that one day he would produce for her,” relates a woman friend, “and he really did it.” Nissim was also invited to play the warm-up act for Madonna’s performance in Israel. He also produced remixes of “The Pop Kids” by the Pet Shop Boys, and recorded a track with Jennifer Lopez. And U2’s forthcoming album will include a remix by Nissim of it song “Love is Bigger than Anything.”

Nissim still doesn’t grant interviews. He has already succeeded in making himself a legendary figure: Why mess with that? Just as he knows how to take the most interesting sounds and transform them into a something new, so with himself, he knows when to reveal and when to block, when to wave his arms and when to smile bashfully. He knows how to read his fans and how to touch them and above all – he does this from a pure place that the audience identifies and gives itself over to with pleasure.