Placing the bisexual-pansexual-polysexual community at the forefront of this year’s gay pride events in Tel Aviv inspired photographer Ofer Keidar to get to know the bi world a little better. Keidar found a way to use his photography blog to encourage bi-pan-poly visibility and to act against bisexual erasure. 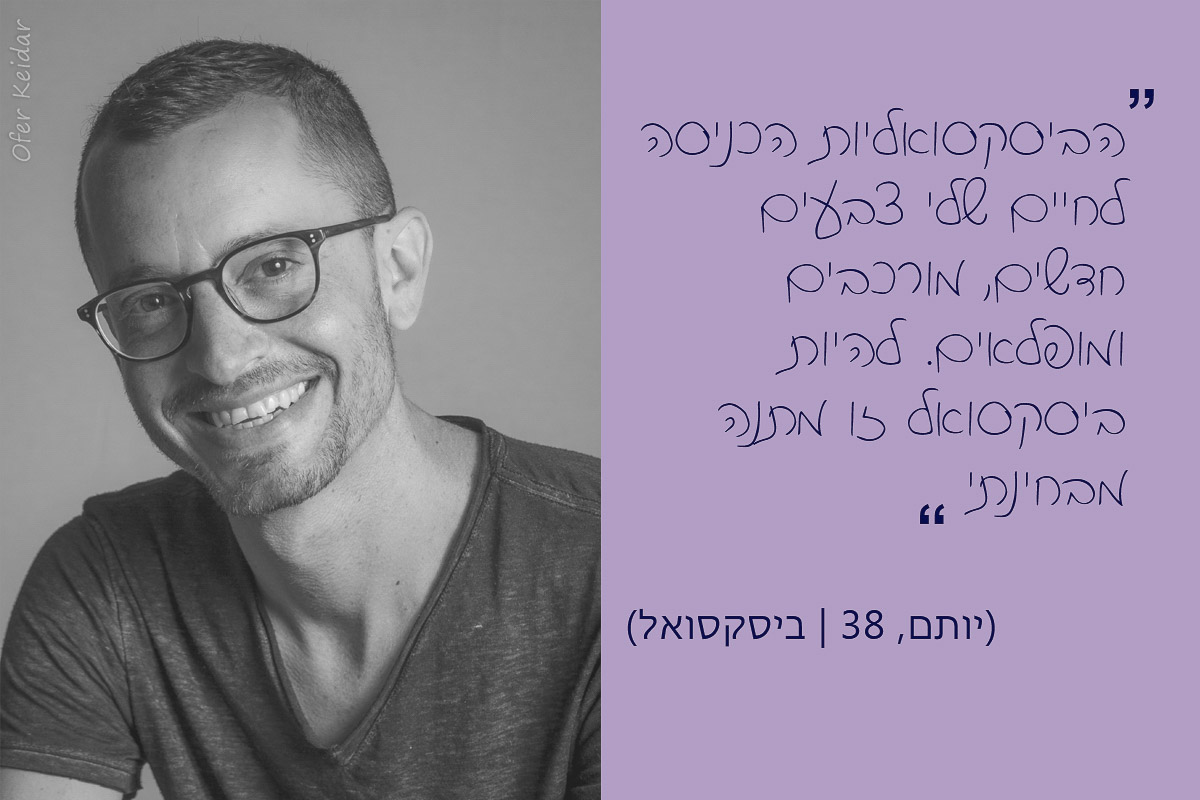 “My bisexuality gave my life new, complex and wonderful colors. Being bisexual is a gift to me” (Yotam, 38)

“Since my youth in the closet in the Haifa of the 1980s and until today, the LGBTQ community has gone a long way,” Keidar explains. “The more people who come out of the closet, the more the Israeli mainstream was exposed mainly to lesbians and gays, and today a boy who grows up in Haifa or another relatively liberal place, is exposed during his lifetime to characters who can be a role model for identification and help him understand who he is. After the long way Israeli society did with gays and lesbians, we would expect to see quite a few figures of multi-attraction people. But in practice, in the Israeli mainstream there are almost no bisexual figures out of the closet, and a bisexaul erasure exists even within the LGT community itself.”

The project presents a variety of multi-attraction people, each of which presents the character in its own name along with a quote from its experience as a bi, pan, or polysexual.

“The people who participated in the project are relatively diverse – from Afula to Beit Kama, singles and couples, with or without children, religious and secular, some of whom came out of the closet a long time ago, and others who came out of the closet only recently, making their courageous participation in the project without any triviality. I was surprised by the amazing turn-out to my call for the photoshoot, and I apologize to the dozens of people who responded to my call to participate in the project and could not be photographed because of lack of time.”

Is there a goal you hope will be achieved from the project?

“I hope that the pictures and the quotes will help to increase the visibility of the bisexual community and stimulate dialogue on the subject. This project may not change the world, but if we can reach the hearts of young people who are looking for their place and who thirst to see and hear people they can relate to- we made it!” 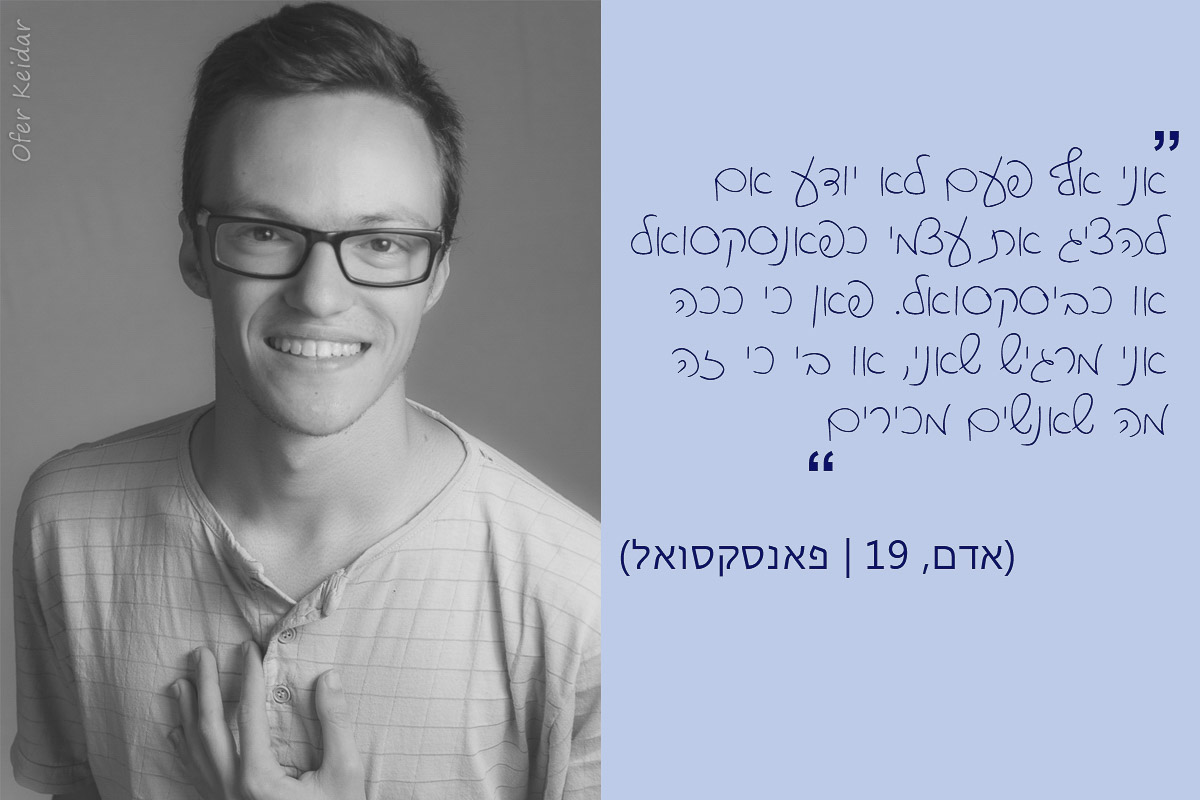 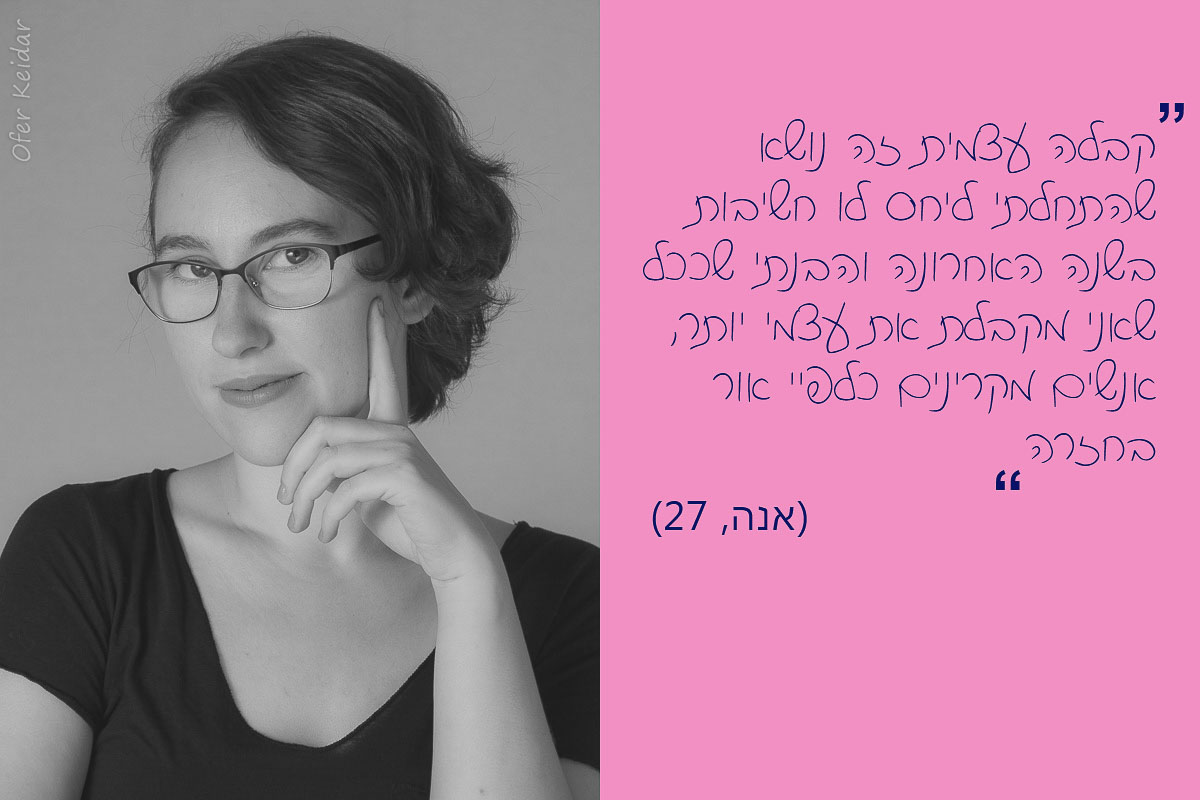 “Self acceptance is something that I started giving a lot of attention to and I realized that the more I accept myself, the more people shine a light back to me” (Anna, 27) 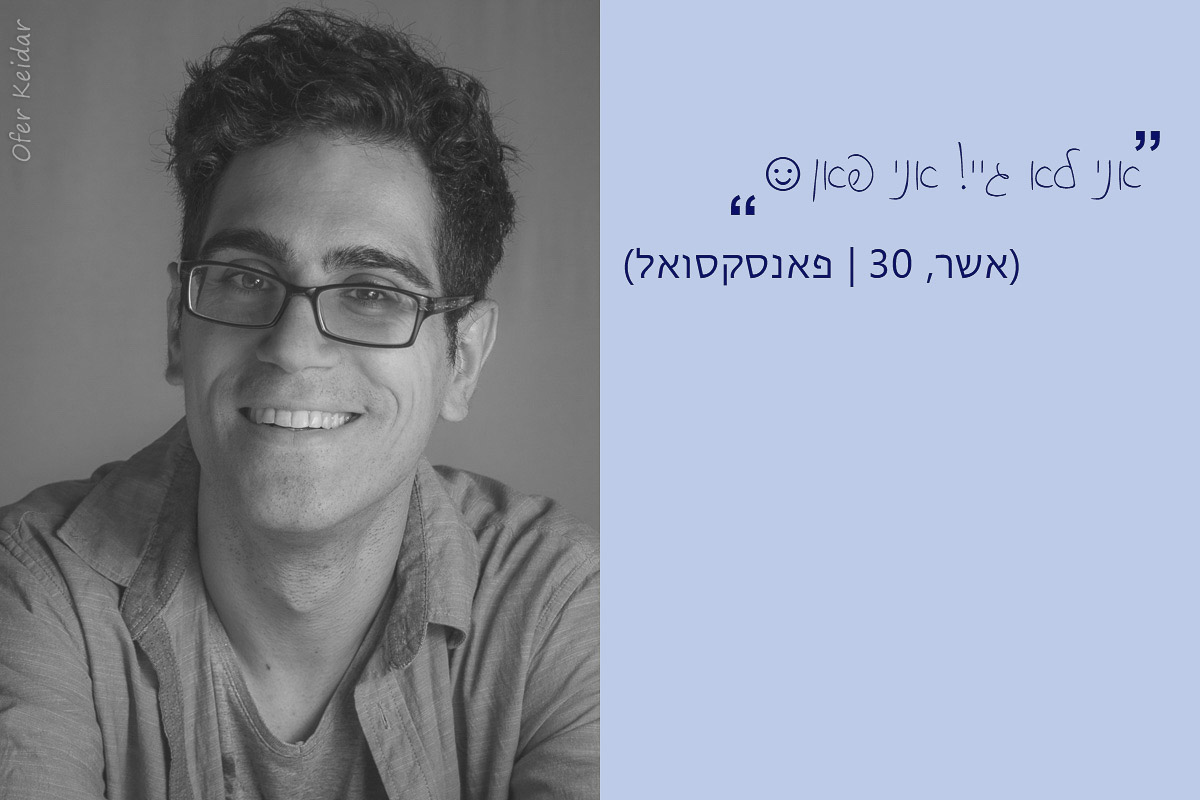 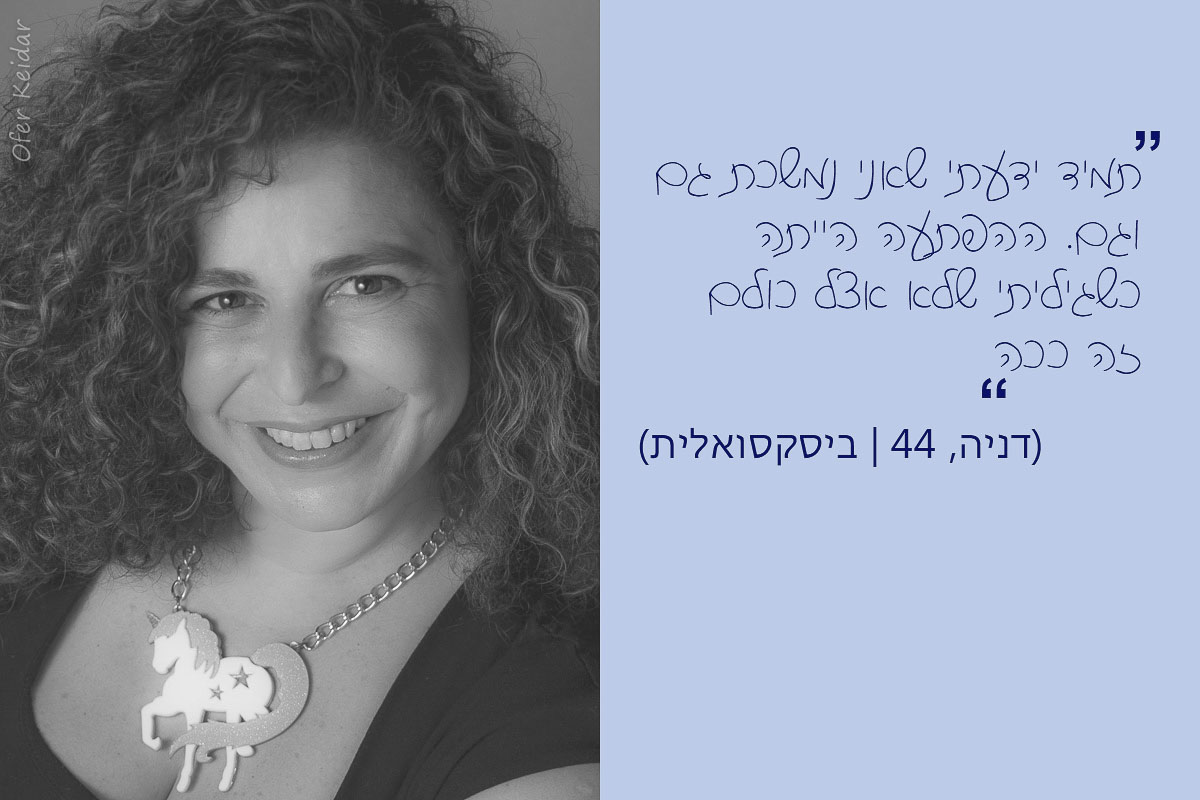 “I’ve always known that I’m attracted to both. The surprise was when I found out that it was not the same for everyone else” (Denia, 44) 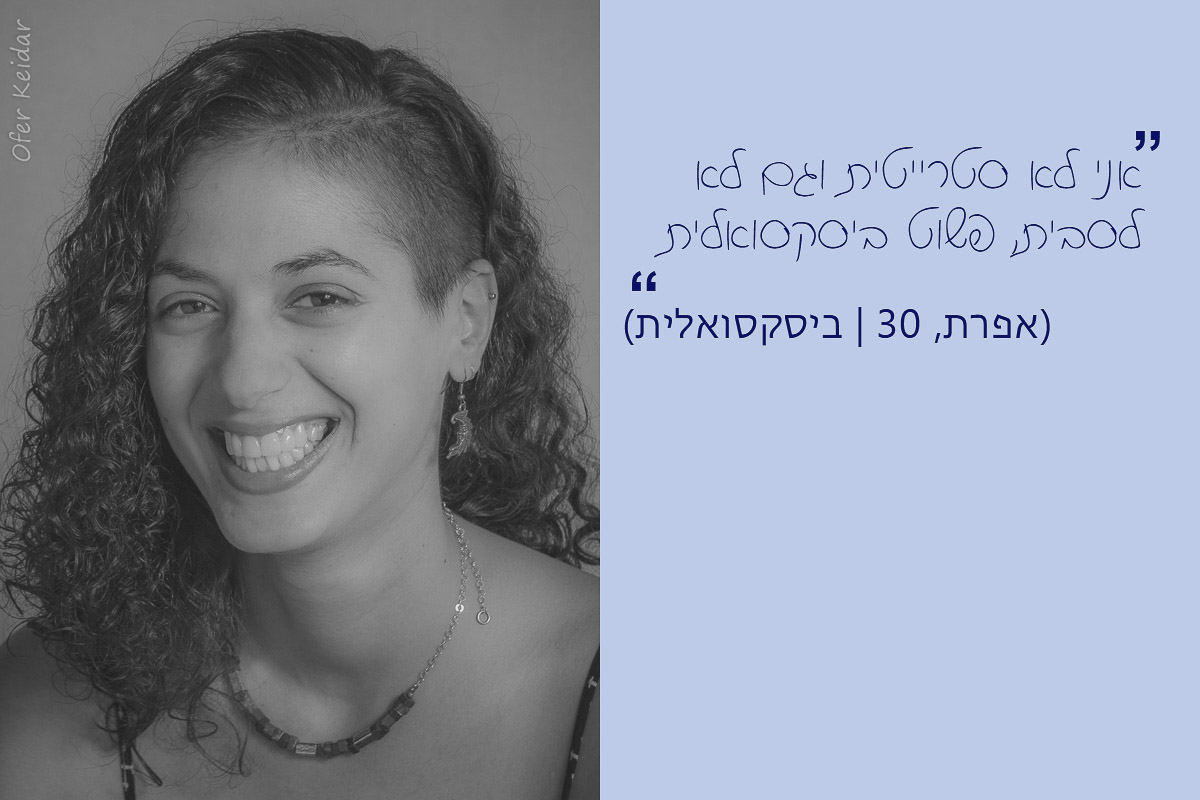 “I’m not straight and not lesbian, simply bisexual” (Efrat, 30) 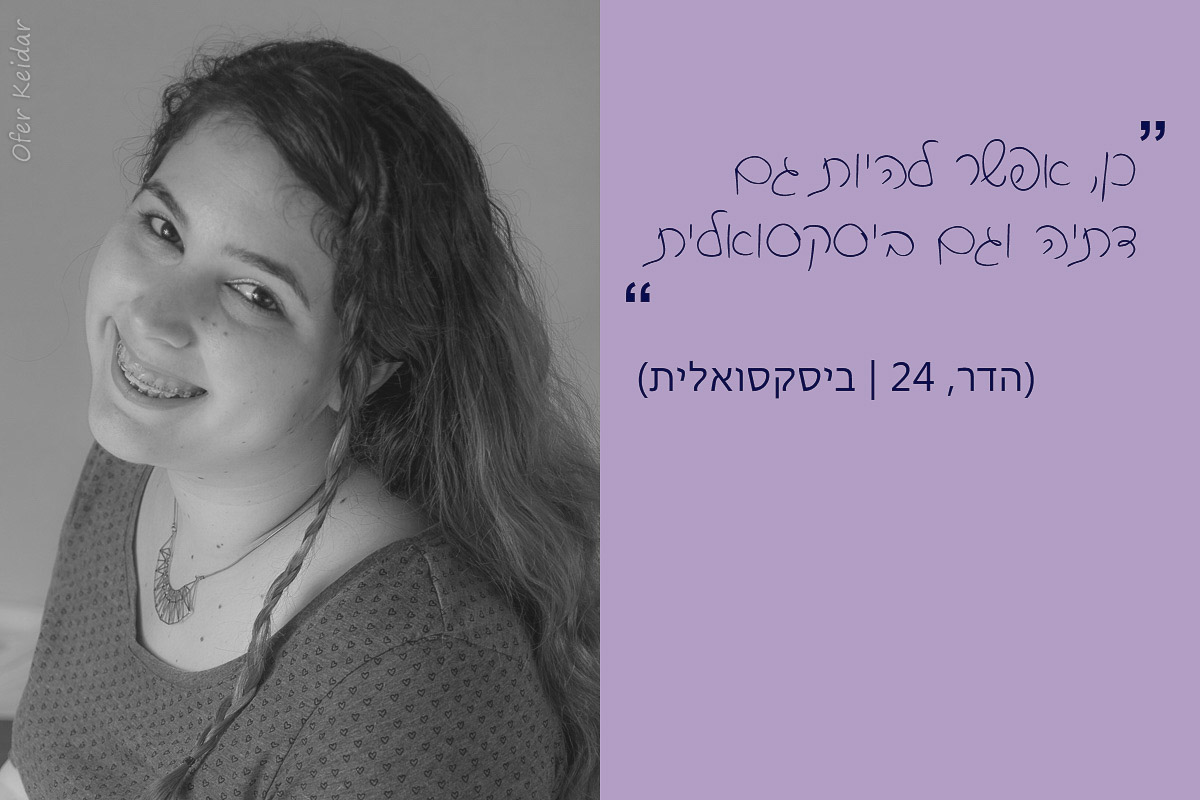 “Yes, you can be both religious and bisexual” (Hadar, 24) 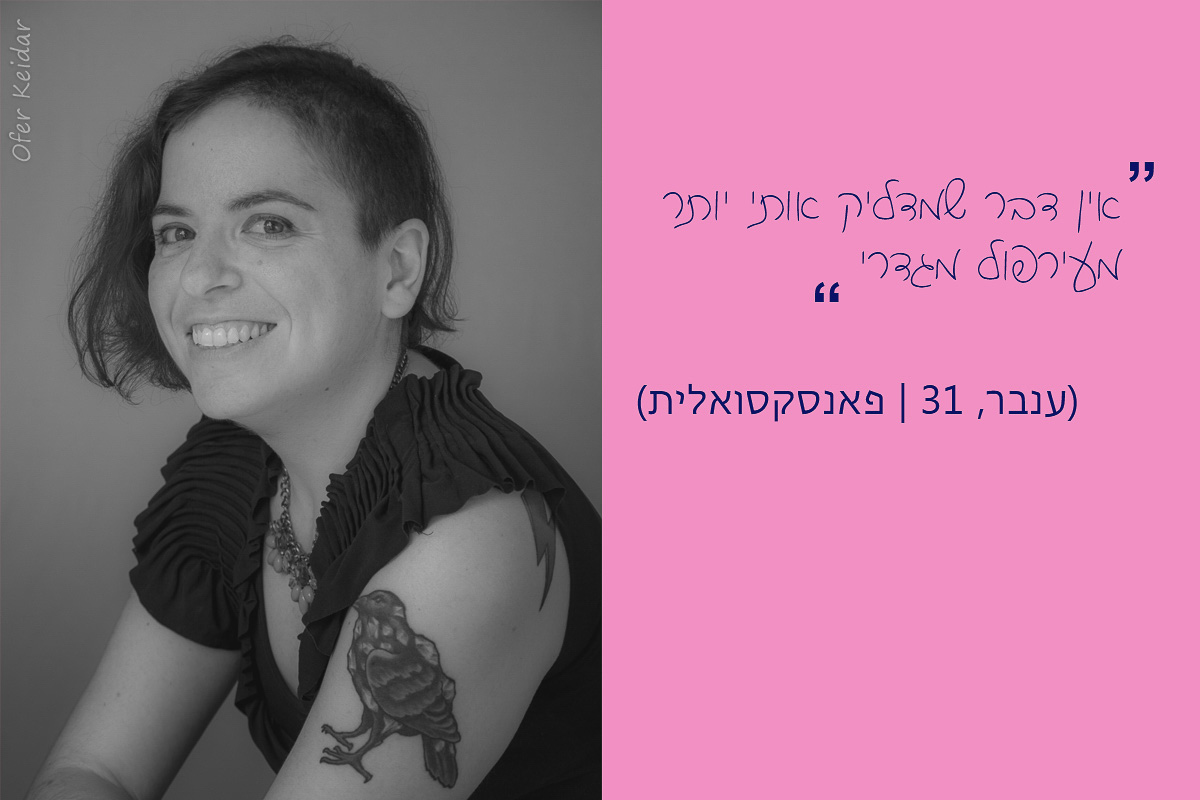 “There’s nothing that turns me on more than gender vagueness” (Inbar, 31) 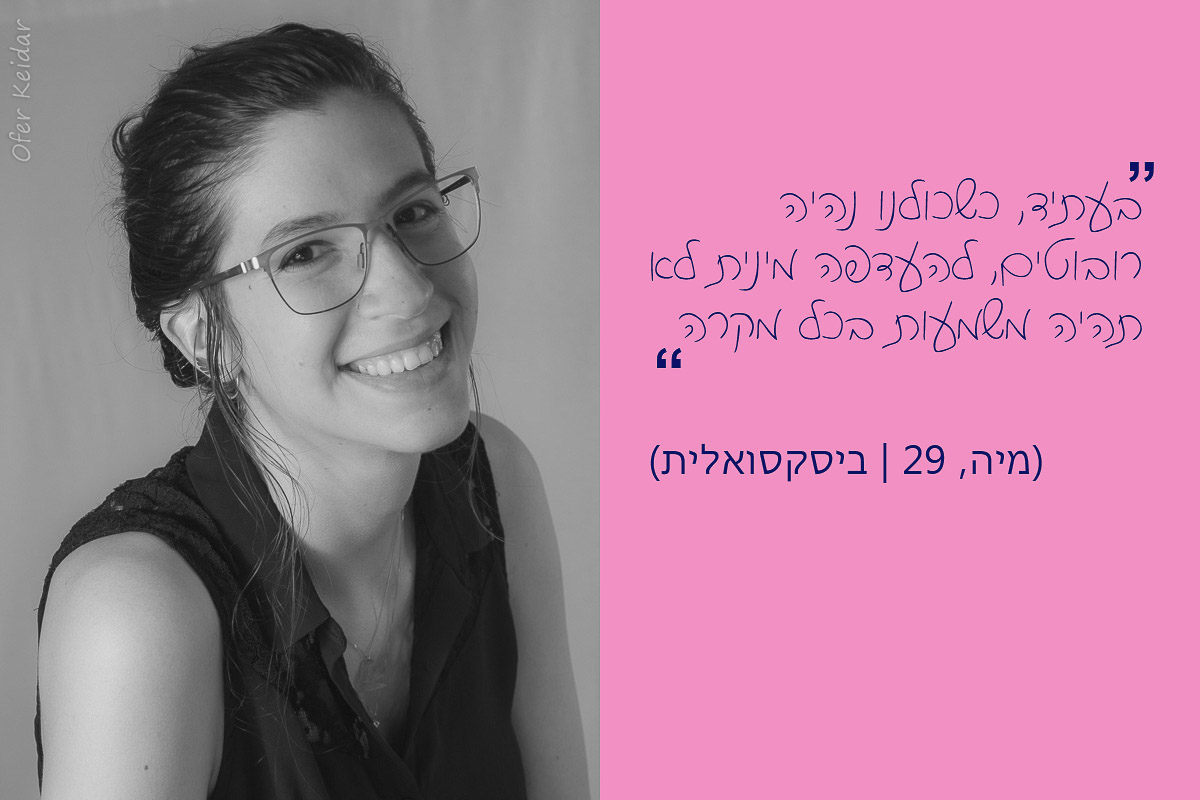 “In the future, when we’re all going to be robots, sexual orientation will be insignificant anyway” (Maya, 29) 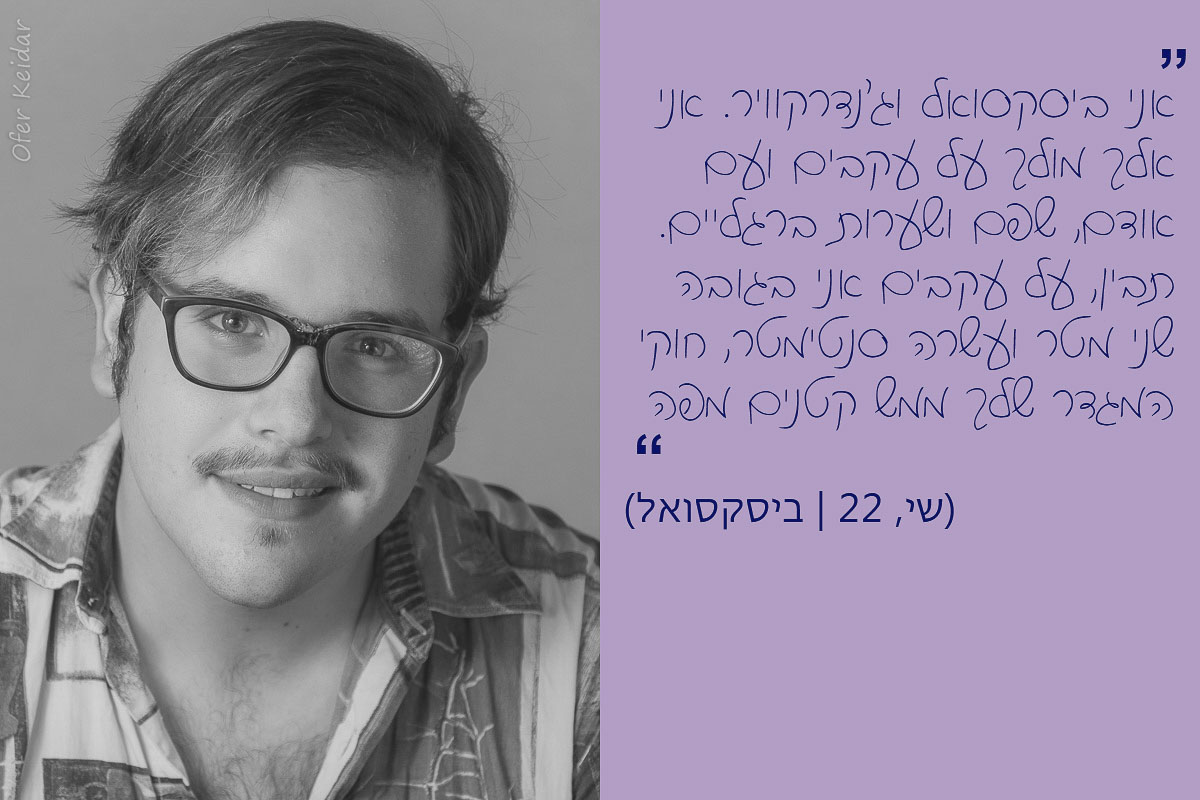 “I’m bisexual and genderqueer. I will walk towards you in stilettos and makeup, mustache and hairy legs. In heels I’m 6.8 feet tall, so from there gender rules look very small” (Shay, 22)