Aviv Grinberg, a student at Shenkar whose works relate to our relationship with the media, decided to put on a special exhibition and donate part of the revenue to the Aguda, the Israeli LGBT Task Force. 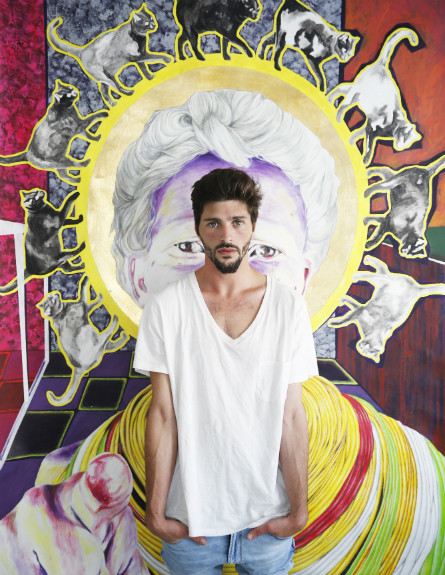 On Thursday, the 15th of October, for one night only, young artist Aviv Grinberg will present his work to the public for the first time. The works in the exhibition will be put on sale, with part of the proceeds going to benefit the Aguda.

“One of the main things that turn a group of people into a community is solidarity,” says Imri Kalman, chairman of the Aguda. “Aviv contacted the Aguda with the proposal to hold the exhibition and donate part of the proceeds to benefit ouractivities. We were moved to receive such a contribution from a community member who sees the importance of the organization’s activities, and it’s more moving than the financing of a government office or a local authority. The Aguda will continue to promote visibility of LGBT people, in the world of art and culture as well.”

“I’ve been painting since I can remember, but it started to catch a new meaning after I finished military service,” says 24-year-old Grinberg. “To be in front of a page or a canvas was a kind of detachment from the outside and a basic familiarity with myself. The past year was shaking with many changes for me. Painting was a relief that had to be done to fill in the gap on the outside of the area that protected me. This is how the exhibition came about. For some time I’ve been working in my apartment on it, and this is the first time that the paintings will go out of the studio. It’s frightening and paralyzing in many ways to put on the first exhibition, but I feel that it is time to release it and cease to be led by fear.”

Grinberg, a student in the Department of Interdisciplinary Art at Shenkar, tries to reflect in his works the impossible relationship of people with the media. “My exhibition explores our perspective as consumers of media, in a world that is constantly changing. The size of my works is inspired by the effect of the giant posters and the flow of information that kind of blows our brains, so that evolution can’t contain it all. The information flooding us by any means possible leaves us shocked, without an ability to contain it. The size of characters that explore the viewer, arouses that same inability to contain”. 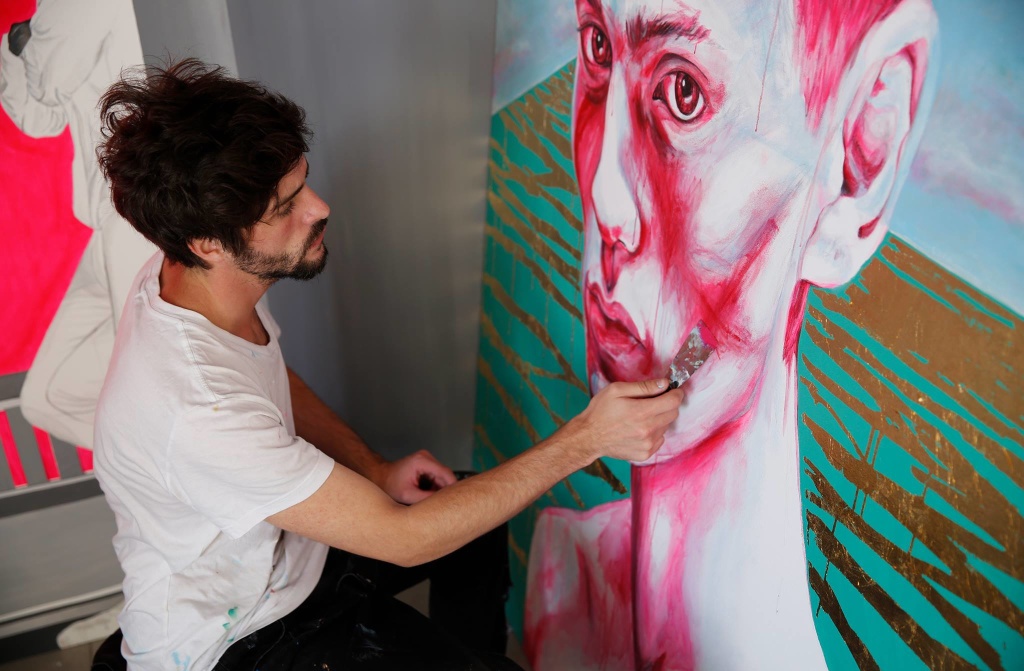 The series that Grinberg presents contains a collection of portraits of characters which require layers of interpretations. “I use kitsch to discuss the conventions of painting and the historic use of the medium, that confronts the conventions of the history of painting,” he says. “My works come from a glance from the inside to the outside, from the characters themselves, therefore it’s a skin treatment of characters that can surprise us, such as unconventional use of colors. Each figure has its own signs of social and cultural difference and its own internal aura that I try to express through the technique of the painting.”