The Aguda, Israeli National LGBT Task Force, has renewed its Arabic Facebook page for the Arabic speaking members of the LGBT community. 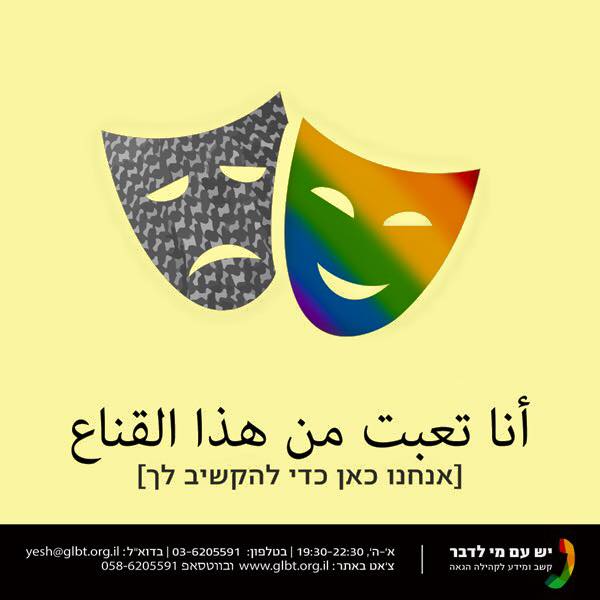 The Aguda ad: “We’re Here to Listen to You”

The decision to activate the page is part of the preparatory work of the Aguda towards uniting the Arabic speaking community as part of a new Department of the Aguda. The Facebook page in Arabic is the first step toward creating a dialogue and accessibility for these LGBT people.

Over the last two years the Aguda has held a framework for LGBT refugees who ask for asylum in Israel and a support group for refugees who arrive from Africa, and Palestinian refugees. The program provides them with legal assistance, help with employment rights, help in accessing medical services, activities for legislative changes and more. The thought behind the Arabic Facebook page is to make these services more accessible.

“Currently we are working on the construction and reorganization of the program for the protection of LGBT asylum seekers and adults at risk,” explains Eyal Migdalovich, program coordinator for LGBT asylum seekers of the Aguda. “The various aid organizations recognized dozens of Arab LGBT youth from the Palestinian cities. And like the other LGBT asylum seekers, the Africans, for example, the Palestinian LGBT people also fled for their lives and are forced to rebuild their lives outside of their communities. The Arabic Facebook page is important for several reasons: first and foremost, as an Israeli organization that seeks to represent all of Israel’s LGBT people we must connect with all LGBT people of Israel, Arabs as well. I think this is a matter that is beyond the political debate over the right and left and over how many people the Aguda really represents. The second reason is that as a community we should take care of the weaker among us, including those who are not citizens of Israel. Even this, by the way, human rights, should be above the political debate. There is no doubt that opening a page in Arabic is the first outreach.”

“Social networks open up for us possibilities that did not exist before,” explains Ran Shalhavi, Director of the Digital department at the Aguda. “If until now the connection with members of the Arab-speaking community was challenging, today is just one ‘share’ away. If thanks to the new page we will get to one teenager on the other side of the keyboard and explain to him that he is not alone, to me we’ve reached our goal.”