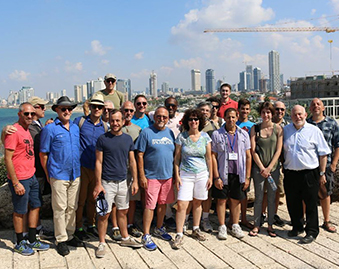 Our blogger Rebecca Levin writes from A Wider Bridge’s 2014 Israel Mission, and today: the first weekend in Israel, which included learning about IGY and other Israeli leaders on Friday, and celebrating a night of music with famous gay Israeli singers Ohad Hitman and Dudu Yzhaki on Saturday.

The LGBTQ community all over the world needs help fighting for equal rights; it doesn’t take a genius to see this fact. Yet, many Jews and LGBTQ identified people turn a blind eye to the suffering of their brethren, thinking that someone else will take care of the issues that plague these communities. Unfortunately, such a perspective on social issues like discrimination slows progress and makes significant change an uphill battle.

I knew all of this before I woke up this morning. Yet, I was like many of the members of the LGBTQ and Jewish populations in that I couldn’t truly be inspired to make a change in the community. I can compare my level of activism to getting an idea for a wonderful poem right before I fall asleep at night: I become very excited and inspired, but ultimately, I am too lazy to get out of bed, turn on the light, and actually do something about it. I know, I lead a sad life.

The people we met with today might change the way I see my activism, though. Throughout the day, we met with LGBTQ Israeli leaders helping the community in almost every way imaginable. From educating Israeli high schoolers about the LGBTQ community to creating a safe place for LGBTQ religious Jews to celebrate holidays, these groups positively impact the lives of people in the Israeli LGBTQ community. The result is huge strides towards acceptance and equal rights for this community.

Take, for example, the Israel Gay Youth (IGY) organization. This group provides support and leadership training for Israeli LGBTQ youth in 22 Israeli cities and for 1,500 participants annually. With so much to offer for queer youth in Israel, IGY is definitely a blessing I’m sure many of us wish we had back when we were baby gays. It’s a wonder that such things didn’t exist sooner.

As I learned about all of the wonderful philanthropic groups Israel has to offer, I couldn’t help but become inspired to drive that sort of change in my own community. Tons of LGBTQ and Jewish people face daily problems, like harassment and discrimination. They need help, and they can’t always find it.

That’s where we as a community should come in. If we take a page, or even just a sentence, from the book of Israeli philanthropy, the world would be a much better place for it. As one of the leaders said today, it only takes one pissed off person to make social change. We shouldn’t wait on others to create change. The result would be amazing.

It doesn’t come as much of a surprise to anyone that Judaism and music go hand in hand. Most of the prayers in our religion are sung, and most synagogues in today’s day and age even have a musical leader, called a cantor. In my opinion, the music that comes along with the religion is one of the most drawing aspects. I always felt closest to G-d when I was chanting, and I’m sure many Jews feel the same way.

But music was only half of the religious picture today. I began my last full day in Tel Aviv alongside several of our group’s members in a Torah study session with BINA, an organization “at the intersection of Jewish Pluralism and Social Action in Israel.” Our BINA representative talked with us about the perceived “conflict” between LGBTQ identities and being Jewish. We interpreted key sections of the Torah, including the story of creation and the sections of Leviticus that supposedly forbid same sex intercourse.

I have to admit, I was hesitant to go to this meeting. I was tired the night before and honestly wanted only to sit with a latte at a nearby café with a nice book. I’m glad I did go, though, not only because it was interesting and informative but also because I got my coffee drink regardless. (Thanks Bina, my roommate, for encouraging me to attend!)

But back to music—because, really, who doesn’t like music? This evening, we also had the privilege of meeting several prominent LGBTQ identified Israeli artists: Ohad Hitman, Dudu Yzhaki, our very own Matthew Loren Cohen and Juval Porat, and Idan Matalon. Though I enjoyed all of the performances, I have to say that I enjoyed Matthew, Juval, and Ohad’s performances the most not because there was anything wrong with the other performers but instead because these performances involved some religious element. This, combined with the morning Torah study, made me feel more connected to G-d, a feeling I have not experienced in a while.

In the coming days, we’ll be in a lot of different areas, including Jerusalem. I can only hope that these feelings continue as the trip does.