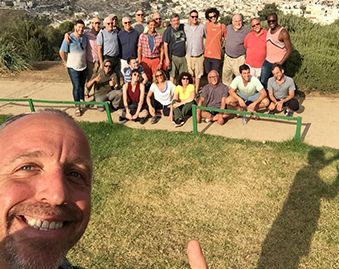 To say that we accomplished a lot today would be a bit of an understatement. We not only drove from almost the northernmost point of Israel all the way to Jerusalem; we also stopped in Tzfat, the center of Kabbalah (Jewish mysticism) and visited an olive oil factory along the way. On top of all of that, we drove along the border of Jordan. Less than a few miles away, we saw towns and hills belonging to the foreign power, which really drove home just how close we are to the Islamic world.

My Birthright trip also went to Tzfat, and we actually ended up doing similar things this time around. We stopped by the studio of Michigan-born Kabbalah artist Abram, visited the Tzfat candle factory, and schmoozed the shops. Though I was heavily involved in the shopping aspect of it (buying gifts for family isn’t as easy as it sounds), I felt a deep connection to the people and the atmosphere of this city. Wandering the narrow streets by myself during our break really grounded me and made me see the religious town for what it truly is: a town of people, each on his or her own spiritual journey through life. For one shop owner, it meant making aliyah to Israel in her early twenties. For another, it meant finding a connection to G-d through calligraphy paintings.

As we drove down the border, the greenery I saw on both sides resonated with me in a way I hadn’t experienced before. Much of the land there was cultivated and might have been for centuries. Though the people and the religions had changed, the land had always yielded beautiful crops. The unity of that one simple task was astounding to me, though I don’t fully understand why.

We arrived in Jerusalem this evening and will go out into the city for the first time officially tomorrow. I am extremely excited to rediscover this city with my LGBTQ brothers and sisters.