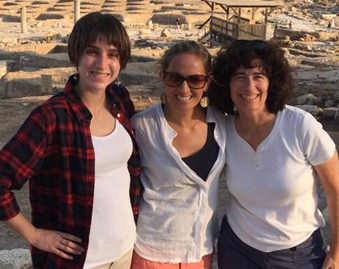 Though we did a great deal today in Israel—everything from visiting Jisir-al-Zarqa, a coastal Arab village near Caesarea, to seeing the ruins of Tsipporri—I have to say that my favorite part of today was the discussion we had after dinner about LGBTQ and Jewish identities. The discussion brought to light a lot of what I had been considering since my first blog.

Mostly, we talked about coming out as LGBTQ and how it interacted with our Jewish, and other, identities. In the few hours we spoke to each other about our stories, we wove a beautiful fabric of not only Jewish and LGBTQ identities, but also identities from other aspects of the queer community.

The discussion was a private event, and because some of the information divulged in the session might be too intimate for me to share, I think it best that I only tell about the trends I observed.

For the most part, it took the Baby Boomers in our group about 1/3 of their lives to come out as LGBTQ. However, the reasons for this were very different. While some confessed fears from orthodox or religious communal rejection, others cited the AIDS epidemic. For one member of our group, the AIDS epidemic was a motivator to come out of the closet. The diversity of reasons and methods of coming out in the Baby Boomer generation truly surprised me.

In the later generations—Generations X and Y and the Millennials—coming out occurred a lot earlier. For some, it occurred as early as 16. The level of acceptance in this group, though, seemed to vary more than in the other groups. Some faced flat our rejection from their families. Others were embraced with open arms and minds. Still others faced doubtful parents and siblings.

No matter the age group, religion played some factor in the coming out process. Or, at least, that’s how it appeared to me. Some took it in stride and did not see their religion to conflict with their sexuality. Others struggled with the bits of the Torah I talked about yesterday for some time.

Personally, I did not see a conflict between my religion and my sexual identity when I came out, nor do I see one now. My issue is more a conflict of which identity means more to me, if that makes any sense. However, I have great respect for those who do, and tonight definitely opened my eyes to the many conditions that accompany our own self-discoveries.

I have to say, though it might sound corny: the group of people I am travelling with around Israel is one of the most beautiful groups of people I have ever met. Today made me realize it.