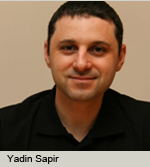 2013 will be the 3rd year in which the Israeli LGBT community organizations come together for the LGBT Academic Papers Contest, a contest for articles and written projects that are all about fighting LGBT-phobia. “We started this tradition two years ago in order to gain more recognition and publicity for papers that had been written by students in the matter of fighting homophobia and transophobia (or LGBTphobia, as it’s recently more acceptable to call it),”says Yadin Spair, 37, one of Israel’s leading activists who also serves as the head of the contest and who collects the projects. “We do not make people write papers on a specific subject. What we do is reward papers that have already been written over the past two years.”

What’s the benefit for the organizations from this contest?

“By collecting the papers, we actually build an archive of material written by Israeli students that focus on the LGBT community in Israel. This archive is available to everyone on the web, and can be useful for other students who’ll seek to write a paper on the subject in the future, or to anyone who’ll want to enrich their knowledge.”

The organizations which take part in this “all-star” contest are IGY (Israeli Gay Youth), Hoshen (education and change) and Tehila (Israel’s PFLAG), and the awards are given each year in IDAHO, the international day of fighting against homophobia and transophobia, that occurs every year internationally on May 17. In Israel, this day is also called “HAVANA,” which is the initials of “Hayom Habein-leumi Neged Homophobia Ve Transophobia” (‘International Day Against Homophobia and Transophobia”), but also means, in Hebrew, “acceptance”. “We came up with the ideas for the contest while we met all the heads of the LGBT organizations in order to talk about what we can do for the day of HAVANA,” says Yadin. “I gave the idea of the papers contest and it received great support from all the organizations, so I took it upon myself, and started calling for papers.”

Who won the contest last year?

“So last year we received more than 40 papers, and we took a closer look at projects that deal with fighting transophobia. One of the most exciting projects we got was dealing with the shameful medical practice of setting the gender of intersexual born infants. Instead of waiting until the child grows up and the gender identity is much clearer, doctors are rushing to remove the male genitals, and basically to castrate them. Another excellent project had dealt with the attitude of gay men towards  transgender women.”

This year, for the first time, the contest  is also opening  the contest to papers from outside of Israel, with emphasis on LGBTphobia and Judaism. “We thought it would be right to do so because part of the homophobic practice sources, such as conversion treatments, are coming not necessarily from Israel, but from  supporting relationships between rabbis inside and outside of the country. For example the American organization JONAH that offers conversion treatments, just as well as the Israeli ‘Atzat Nefesh.’ We also hope that this contest will help bring the Jewish LGBT community closer to Israel, and may open up a door to other initiative projects in the future.”

If you are interested in sending in a paper, you can send it to Yadin@havana.org.il along with your resume and contact details. Final deadline: January 31, 2013.