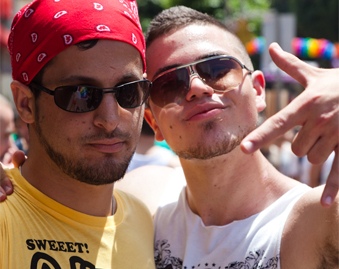 The trendy website NewNowNext, owned by MTV Logo, has listed Tel Aviv’s top 10 places ‘where the gays are,’ describing the city as “one groovy, fun-loving and very, very gay modern metropolis.” Here’s the ABC-homo-guide to Tel Aviv, as recommended by the Logo Channel’s site: 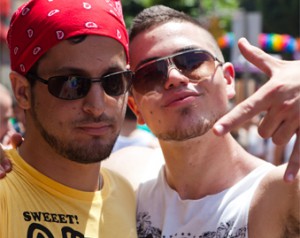 Nightlife: It’s recommended to download an app for gay nightlife called TLV Scene should keep you plugged into what’s au courant. Reccomended are Evita and Shpagat.

Tomatoes: Israel is a miracle of agriculture and an oasis in the desert that yields gorgeous tomatoes that are rapturously ripe and naturally red. Expect to have tomatoes with every meal, sometimes in multiple iterations. The diet here is pretty optimum-lots of vegetables, salads, hummous, fish, and light on the meat.

The Beach: It’s easy to find the gay beach in Tel Aviv, as it’s located just below the Hilton Hotel and a park that used to be a hotbed of pre-Grindr cruising.

Jaffa and Shuk Hapishpeshim (flea market): Jaffa is the Arab village on the Southern end of Tel Aviv, a great getaway for a few hours to a place overlooking the ocean that’s lined with white stone walkways and a palpable sense of history. On the lower end on the inland side of the hill a sprawling flea market offers an impressive array of both treasures and junk.

Architecture: Tel Aviv is home to the world’s largest concentration of Bauhaus architecture. To wander around any of the three conservation zones where most of the buildings are concentrated is to experience as complete a vision of this brand of architectual utopia as exists.

Art: Go to the Tel Aviv Museum and to Somner Gallery.

Pride: (in June) The main parade wanders down Bugrashov Blvd, and most every restaurant, bar and shop along the way throws their own sidewalk party to toast the marchers. Usually, the march ends up with a big party on Gordon Beach.

Read the full article on NewNowNext