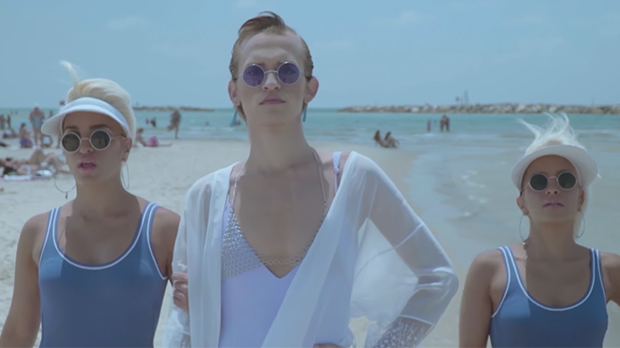 “Blonde & Brunette” by DJ Only featuring Ishtar is the song that was chosen by the city of Tel Aviv to lead its annual Gay Pride events that are placing the bisexual community in the front. The video for the song was premiered earlier this week at the city hall’s official toast event to kickstart Pride Month. Watch the video here.

In recent weeks, the city of Tel Aviv has worked on the an official music video to lead its 2017 gay pride events, which will be held under the theme of bisexual visibility.

The producers of the bisexual parties Lizi, Cult and Bissi and WDG LGBTQ community website were selected by the city to collaborate in the production of its official video, decided to create an original song to correspond with the subject of bisexuality, after two years in which the official pride video was a cover version for big and familiar hits.

Gil Weingerten, known as “DJ Only,” who is responsible for various recent Israeli hits, and is considered a new and talented artist, was chosen to produce the song. Wingerten received ideas and inspirations gathered from members of the bisexual community, and wrote and composed an original song that includes references to the bisexual community and its Tel Aviv life experience.

The song is performed by the international Israeli recording artist Ishtar, who has released music in Hebrew, French, Arabic and Russian, and won international success with a variety of hits.

The surprising combination between Only and Ishtar also marks the message that the video’s producers are seeking to convey – intellectual openness in both music and sexuality.

Ishtar, who is currently living in France, came to Israel for the last two weeks to shoot the video in various locations around Tel Aviv, including the NYX Hotel, the city’s official hotel for the 2017 gay events.

The filming of the beach party scene took place at Gordon beach. Dozens of prominent figures in the bisexual and queer community took part in this scene, dressed in beachwear and bathing suits courtesy of Nike and Castro.