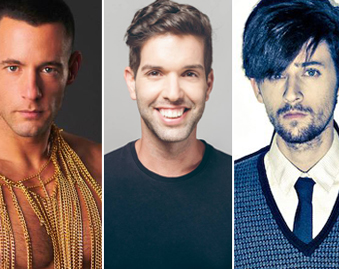 As a part of our LGBT trip to Israel, A Wider Bridge is very happy to personally introduce to our group three emerging musical artists who are very special to the LGBT community in Israel. They sing both in English and Hebrew, and appeal not only to the Hebrew speaking audience – but are aiming for the international market.

David Lavi – an ex-orthodox  religious singer who gained a lot of popularity finishing as the runner up on the 9th season of “Kochav Nolad” (the Israeli equivalent of ‘American Idol’). Lavi is very close to the LGBT community, and his debut single “Straight Away”, which he wrote himself, has a double meaning about coming out.
Learn more about David
Visit David’s Facebook Page
Selected Song – watch video
Buy David’s music on iTunes

Dudu Yzhaki – an emerging singer/songwriter who also volunteers at IGY (Israel Gay Youth) and is currently a few steps away from releasing his debut album. Dudu is known for his cute personality and lively stage performances, and also for his interesting interpertations of Madonna’s “Vogue” and some Beatles songs.
Learn more about Dudu
Visit Dudu’s Facebook Page
Selected Song – watch video

Yehonathan Gatro – In 2009 Yehonathan managed to get two of the videos  from his debut English album “My Turn” onto the #1 spot at MTV Logo’s chart. Australia’s gay magazine named his video “Balayla Ham Bakayitz” (‘It’s Hot on a Summer Night’) as one of the top 10 gay videos of all time. Since then he’s been focusing on the international gay audience, singing mostly in English. In February 2013 he released his second album, ‘Yeho.’
Learn more about Yehonathan
Visit Yehonathan’s Facebook Page
Selected Song – watch video
Buy Yehonathan’s music on iTunes