Israel marks  National Holocaust Remembrance Day on Monday,  and on Sunday, Remembrance Day eve, the gay and lesbian center in Meir Park in Tel Aviv holds a memorial ceremony for members of the gay community persecuted by the Nazis.

The ceremony will start at 20:00 with the participation of the LGBT ensemble youth group. Also expected to take part in the ceremony are members of the Israel Gay Youth Organization and other organizations’ volunteers.

Immediately after the ceremony the play “Watches” will be put on in the theater– an emotional play that deals with homosexuals during the Holocaust, in the impossible conditions of a concentration camp. The play takes place in 1941 in the concentration camp Zaokshuazn , and deals with the story of a friendship between two prisoners, a Jewish watchmaker and a gay Christian. Benjamin Hirschfeld was formerly known as the best watchmaker in Berlin. He doesn’t know what happened to his wife Sarah and his children Max and Doki. The Kapo introduce into the room where he was working a young German named Hans, an extroverted gay. To survive he claims to be a watchmaker and asks the Jewish watchmaker to teach and train him for the job and thus to save his life. In return for learning watchmaking Hans gets Benjamin information about the fate of his wife and children,  information  Hans gets from a Nazi soldier who has sex with him at night.

A special relationship develops between Benjamin and Hans due to the situation that was forced upon them: the loneliness , and being different. Their relationship holds humor, imagination and hope of survival. The professional cast – Rami Baruch in the role of Benjamin Hirschfeld , Roy Horovitz in role of Hans and Omer Etzion in the role of the Kapo – allows viewers to be exposed to the other side of people during the Holocaust.

The play was written by playwright Dan Clancy, translated by Sheila Farber and directed by Lee Gilat and has been running on theater stages since December 2002. The play premiered in London in 2002, has received rave reviews and earned its author  two prestigious awards in the U.S.: the Hudson River Classics Playwright Award and the Writers Digest Playwright’s Contest Award. 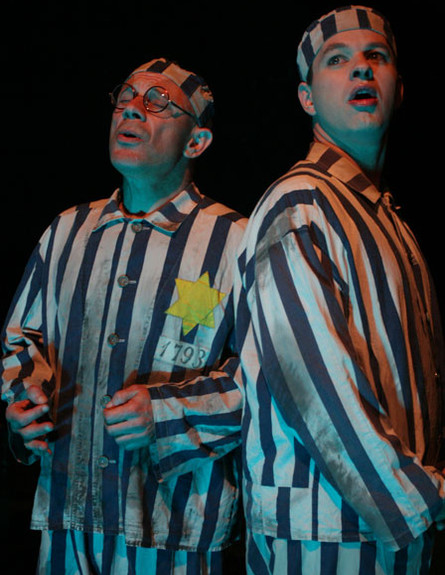