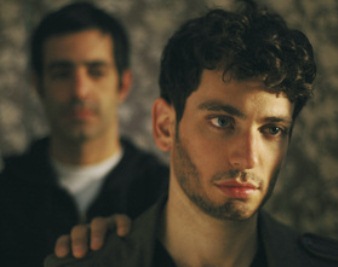 A San Francisco audience of 40 was treated to a taste of Tel Aviv’s much discussed LGBT cultural scene with three short films by some leading independent LGBT filmmakers. Two of Tel Aviv’s leading LGBT activists, Anat Nir and Shai Doitsh, discussed  the goals and achievements of the LGBT community, the growth of gay tourism to the city, and the controversies surrounding the charges of “pinkwashing.”

Anat Nir is an activist and LGBT social and arts promoter. Shai Doitsh is the chair of The Aguda, Israel’s oldest LGBT organization, and a leading advocate for gay tourism. Both Anat and Shai are leaders of Tel Aviv Gay Vibe.

“Gender and Peace” by Yasmine Novak

Cosponsored by Nehirim, Keshet and the Israel Center of the Jewish Community Federation.