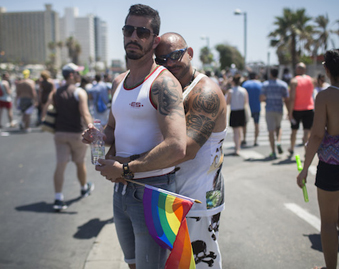 The LGBT community in Israel is now being called on to vote for the theme of Tel Aviv Pride 2017.

Themes for Tel Aviv Pride in the past two years were ‘Women, for A Change’ and ‘Transgender visibility.’ This year, for the first time, the voting on the theme is open to everyone in the community- through prominent LGBT Israeli website WDG.

This year there are eight suggested themes to choose from. Every community member has one vote: Fighting LGBTphobia and Cyberbullying, Suppressed sub-communities in the LGBT Community (Financial discrimination and others), Safe Space and Fighting Sexual Harrasment, Bisexual Visibility, Healthy Community, LGBT People with Special Needs, LGBT Elders and Being Different.

After only three days since the poll opened, and with over 1000 voters, the theme of ‘Bisexual Visibility’ is in the lead, followed by LGBT Elders and LGBTphobia and Cyberbulling in 2nd and 3rd place, respectively.

In Israel, most of the people who identify as bisexual claim to live in the closet, because society – which means both the straight and gay communities – don’t take bisexuality seriously and claim it’s ‘just a phase.’ “We need This in order for people to stop assuming that we are gay, lesbian or straight,” the bi community writes. “We need it so that people who are outside of our community will ask themselves,’maybe I am bi, too?'”