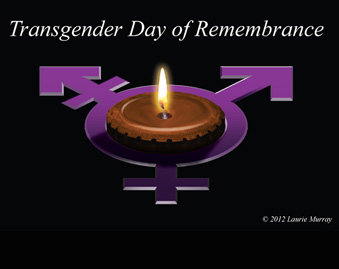 Transgender Day of Remembrance (TDOR), memorializes trans individuals who have died because of anti-transgender discrimination and victimization. It occurs annually on and around November 20. As the 2012 TDOR will be marked next week, here is a complete dictionary of contemporary and Jewish Bible terms of gender diversity. Developed by Ari Lev Fornari in collaboration with Rabbi Elliot Kukla and Rabbi Dev Noily. Courtesy of Keshet.

Transgender or Trans: An umbrella term for anyone who knows themselves to be a gender that is different than the gender they were assigned at birth. Some trans people may have an alternate gender identity that is neither male nor female, and for some people their gender identity may vary at different points in their lives. Some transgender people modify their bodies through medical means, and some do not.

Gender Identity: A person’s inner understanding of what gender(s) they belong to or identify with. This is each person’s unique knowing or feeling, and it is separate from a person’s physical body or appearance (although often related).

FTM (Female to Male): A person who appeared to be – or was assigned at birth to be – female, was raised as a girl, who knows himself to be male, and who wishes to or does live as a male part or all of the time. Some people may also identify as “transmen” or “trans-masculine.”

MTF (Male to Female): A person who appeared to be – or was assigned at birth to be – male, was raised as a boy, who knows herself to be female, and who wishes to or does live as a female part or all of the time. Some people may also identify as “transwomen” or “trans-feminine.”

Intersex: A general term used for a variety of conditions in which a person is born with a reproductive or sexual anatomy that does not seem to fit the normative definitions of female or male. Visit www.isna.org for more information about intersex issues. Hermaphrodite is an older term used by the medical community to describe intersex people. It is considered a disrespectful term, because it stigmatizing and does not reflect modern scientific understanding of intersex conditions. If you hear someone use the word hermaphrodite, please let them know that the term ‘intersex’ is preferred.

Gender Nonconforming: An umbrella term that can include anyone whose gender identity, expression, or behavior is outside of social norms of women who are “feminine” and men who are “masculine,” such as butch women, effeminate men, drag queens/kings, fairies, bois, and others.

Queer: 1) An umbrella term used by some to describe lesbian, gay, bisexual, and transgender people. 2) A term used to describe people who transgress social, cultural, and sexual norms. 3) Historically and currently used as a slur targeting those perceived to transgress “norms” of sexual orientation and/or gender expression.

Genderqueer: 1) A broad political and cultural identity that includes many (but not all) transgender, trans-sexual, and gender nonconforming people, as well as others who see their gender as falling outside of main-stream norms. 2) People who identify as neither male nor female, both male and female, or who claim an alternate gender identity of their own.

Zachar: This term is derived from the word for a pointy sword and refers to a phallus. It is usually trans-lated as “male” in English.

Nekevah: This term is derived from the word for a crevice and probably refers to a vaginal opening. It is usually translated as “female” in English.

Androgynos: A person who has both “male” and “female” sexual characteristics. In the Talmud, the androgynos is understood as someone who both has a penis as well as some female sex traits. 149 refer-ences in Mishna and Talmud (1st – 8th Centuries CE); 350 in classical midrash and Jewish law codes (2nd – 16th Centuries CE).

Saris: A person who is identified as “male” at birth but develops “female” characteristics at puberty or later. A saris is considered male, but has no penis or a very small penis. A saris can be “naturally” a saris (saris hamah), or become one through human intervention (saris adam). This status is also known as a eunuch. 156 references in mishna and Talmud; 379 in classical midrash and Jewish law codes.