“The words of Rabbi Levinstein contradict the values on which we grew up and were educated in the academy,” wrote the students following Levinstein’s speech that said LGBT people are ‘deviants’ and ‘lost the normalcy of life’ 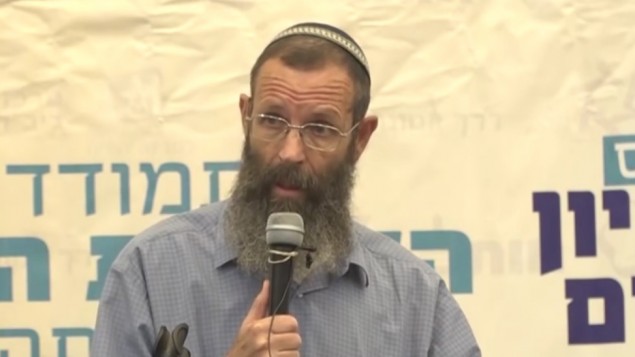 Graduates of military academies, some of them students of Rabbi Levinstein, clearly voiced their opposition to the words of the Rabbi and accused him of speaking on their behalf. The students also stated that they will arrive as a group to march in the Jerusalem parade on Thursday.

“At this time, when the military academies allow stubborn weeds to grow, weeds of hatred and education to violence – they teach those who will be the next officers of LGBT IDF soldiers, and the heads of the academies fell silent and abandoned their LGBT and heterosexual apprentices and graduates. This is why the gay pride parade in Jerusalem is more important than ever,” the statement of the students said.

“We will gather to express solidarity and brotherhood with the gay community in its struggle for equal rights! We will walk together with a clear message to the whole Israeli society – lovable the person who created in the image, and love your neighbor as yourself.”

At the same time, a petition of a group of graduates and instructors of the military academies calls for the preparatory Council to condemn the remarks of Levinstein and to refrain from inviting him to address students in the future.

“His words contradict the values on which we grew up and were educated in the academy-values of solidarity, tolerance and equality. We should not give a place or a stage to an educator who expresses himself violently and irresponsibly and endangers human life, as the words expressed by Rabbi Levinstein. Similar words to those previously spoken by public personalities have caused actual acts against LGBT people. Non-intervention of the preparatory Council is tantamount to supporting the words of Rabbi Levinstein and legitimizing his ideological and educational way.”

Levinstein is also under fire from Women for Religious Zionism, many of whom support the attack on the rabbi’s words and personalize it.

“HE is the other, the different, the strange. The one that we have to accept,” wrote Yael Mishali, who was later nicknamed ‘mother loiness.’ “HE is ‘the insane movement of people who have lost the normalcy of life'”

“You do not call my son a deviate from the stage and walk off it without getting the same intensity from me. This is not happening. Not when you’re the head of a military academy… I would not deteriorate on a Friday night to this pervert’s language, but if you call my son a pervert, if you stand on stage and know that you have homosexual students who will want to commit suicide after they hear you, and perhaps WILL commit suicide, and you don’t care about it – someone should kick you back to where it hurts. Where you yourself are a pervert. From which you allow yourself to distort the Torah and morality and gradually reduce it to primitive and sick homophobia. How many of your students already have committed suicide because of you, Rabbi Yigal? How many more will commit suicide? You have murdered and also taken possession.”