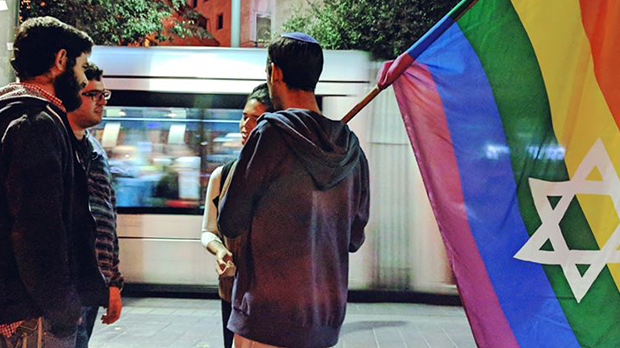 Uria Ben Brit stood at The Meeting Place with a Star of David rainbow flag on Yom Kippur eve. The combination of it being the holiest day on the Jewish calendar and the place he was standing at in Jerusalem, led to some interesting and even inspiring stories, coincidences and conclusions. Ben Brit wrote about this experience on Facebook. 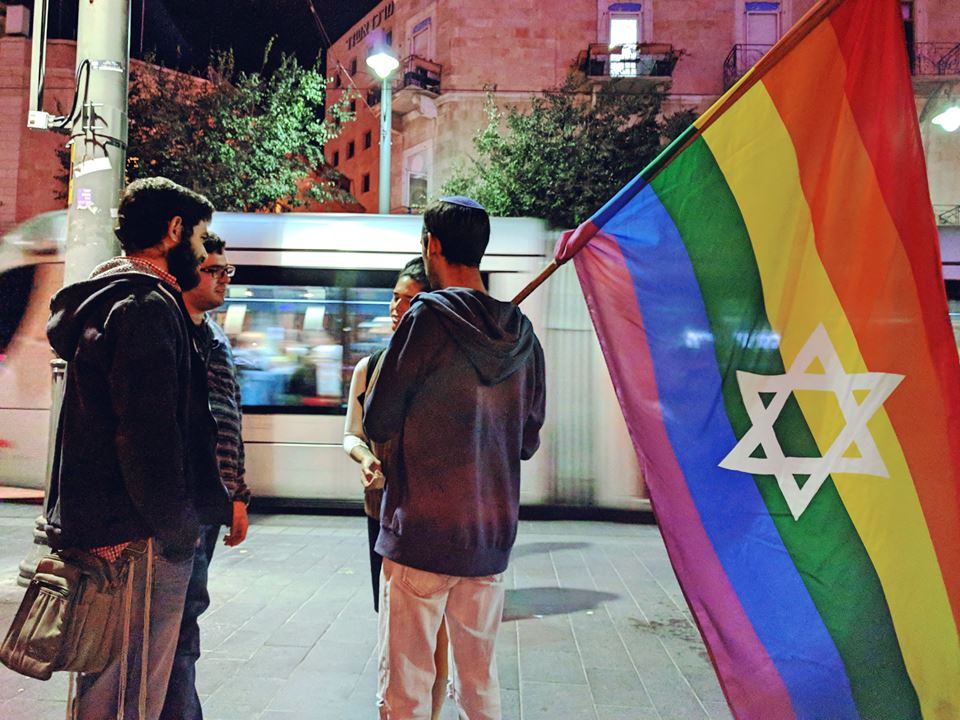 Two young men from Manchester came to me and asked me what flag I was holding. “A rainbow flag,” I replied, and they didn’t understand what I was talking about. “The LGBT flag,” I tried again, but that did not help either. Only when I explained what LGBT stands for, they got it. It was very amusing to me that one of them then assumed that it’s impossible to be both LGBT and an observant Jew, because he showed no understanding neither in the LGBT community nor in Judaism. So I gave him an advice for life: have a fewer exclamation points and more question marks.

I had a good conversation with an attentive and reasoned Haredi guy. From the question of “How does it fit with the fact that you are religious” (I answer this question at least 10 times every night) we moved on to talk about sexuality and its purpose. He spoke of sexuality as “lust” and a low thing that meant only to bring children into the world, which, for him, was the act’s only holiness. I completely disagreed with him and claimed that if that is true then why a woman is allowed to have sex with a man during pregnancy even though it’s clear that she can’t get pregnant? I claimed that there’s obviously a dimension of connection and intimacy that can and should be invested in. I think that Judaism does not look at the physical body as a piece of disgusting meat, from everything I have learned, but emphasizes the connection of the body and the soul in a positive and holy direction.

There were two who tried to hit my special flag and pulled it by force. Thankfully I’m not alone there so I feel protected and everything ended ok. We do risk ourselves there at the forefront, but it’s totally worth it. There’s also a police force close by and it can be involved in extreme cases. The two young men were not religious as far as I can remember, probably traditional. It’s sad that violence is the language they choose. Verbal violence is the most common with us and physical violence is quite rare. They don’t know what to do with their fears and how to translate it into words so they learned to use their hands. We try to give a model to a non-confrontational and unmediated discourse. This is also what I explained to an angry Haredi who didn’t understand why I was were there and asked if I wanted applause from him.

There are many cases in which people pass by and point to one of their friends saying “he’ gay”, “she’s lesbian” and it is not always clear whether they are laughing or not. Sometimes it’s true and people come to say thank you that we are there or smile from afar like I saw someone walking from a distance and smiling broadly as soon as she caught us, so I smiled back at her. And when it’s not true, then c’mon, what is so funny about someone being LGBT. Many times people ask me if I’m gay, even come especially to ask it and go even if they were in the past, and I simply say “Yes” and watch them being amazed that someone “admits” it so nonchalantly and routinely and without being insulted/in denial/funny. If that’s what they need to hear then I’m willing to say it to them happily 100 times more.

To me, the story of the evening was this: Four religious guys came toward me, and one said something about tomorrow’s being Yom Kippur and that it was inappropriate for me to stand there or something. The second guy then told me that I was not religious and then the third one said, “enough guys, what’s your problem? I wish you only the best, G’mar Hatima Tova.” And then, what a wonder, all the others straightened out, changed energies and wished me the same thing and left. This only shows how sometimes opening a positive path can completely change a conversation- and how important it is to talk and be active in multi-participant situations to determine the direction in which things will go.