How does one move from growing up in a family that helped start the Muslim Brotherhood and providing material support for terrorism as a child onto being an outspoken advocate for the State of Israel and an active supporter of A Wider Bridge? Quentin Hill, our Northeast Manager, writes. 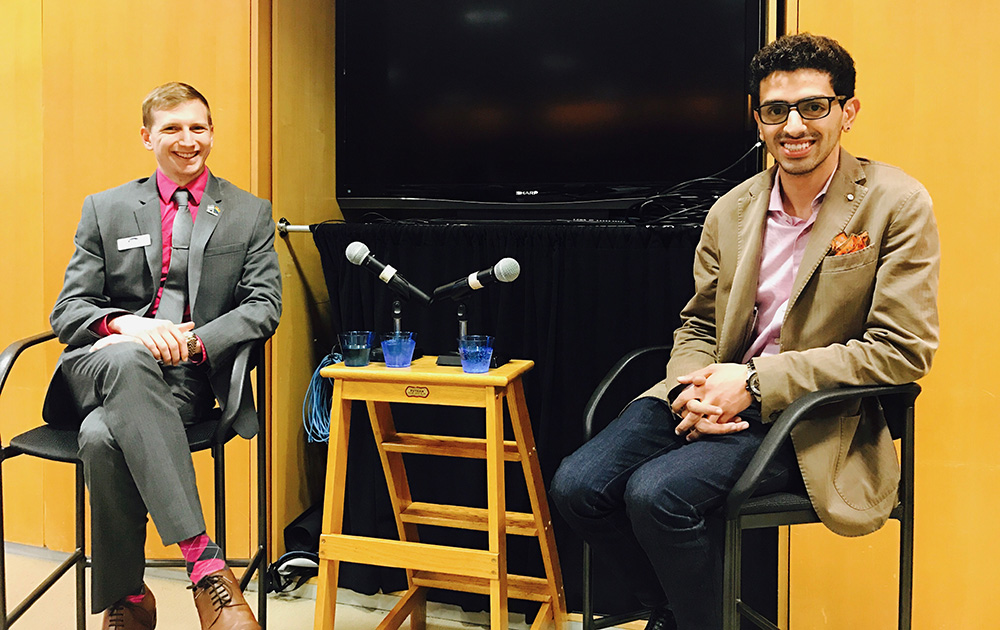 Quentin Hill (left) interviewing John Calvin at JCC Manhattan: “You can grow from the people you viewed as the opposition.”

I recently had the privilege of interviewing John Calvin, a gay, Palestinian, Christian who grew up in a prominent Hamas family in the West Bank. When you look at those first three identifiers, they seem wild enough, without having to add the Hamas family element. As I sit and listened to John’s story about his experience in an Israeli detention center and how it actually made him achieve a better understanding of the Israelis, impacted his decision to convert to Christianity, flee his homeland, and eventually come out as a gay man, I was astonished. There are many conversations surrounding the Israeli-Palestinian conflict, but how often do you hear a perspective as unique as John’s?

John Calvin grew up in a family that helped start the Muslim Brotherhood, which turned into Hamas, in the West Bank. His grandfather, father, and uncles are all prominent Hamas leaders. As a teen, John often wandered into Israel. He was eventually detained by the Israelis and put into jail. While there, he was sexually assaulted by another inmate, a Muslim Palestinian. The Israelis gave John the help he needed, both medical and psychological. This experienced ended up changing everything he grew up knowing. The Israelis were not bad people who wanted to kill him, but rather human beings who offered their assistance in his time of need following a tragic incident.

Several years after his release, John made the decision to convert to Christianity. His newfound religious identity was not embraced by his Hamas affiliated family. He was found guilty of apostasy and a death sentence was handed down in absentia. John fled to Jordan and eventually made his way to Canada. After many immigration obstacles there, it was discovered that Canadian law did not allow him to seek asylum because he had provided material support for terrorism as a child. He was given a deportation order back to the West Bank. Knowing that his life was endanger if he went back home, John made a decision to get across the border to the United States.

Since his arrival in the United States, Calvin has become an outspoken advocate for the State of Israel. He’s worked with many organizations in Washington DC and spoken to many elected officials about his support for Israel. More recently, John has gotten to know our DC staff, Jordan Schwartz, who introduced John to A Wider Bridge and he has been an active supporter of our work ever since. After I met him, at CBST I knew that we had to share his story with our supporters. We approached the OUT at the J at the JCC Manhattan to cosponsor this event with us. They were excited to do more LGBTQ programming, and thought that John’s story was very interesting. We brought together over 60 people to hear John speak, and had a very vibrant Q&A session following the interview. John was asked about a broad range of issues from his background, LGBTQ life in the West Bank, his opposition to BDS, and how he views the Arab world’s approach to Israel. The event was very engaging!

In a conversation that is often dominated by blatant lies, sometimes half truths, and much controversy, John’s story is unique. Not only does Calvin bring the experience of growing up in the West Bank, but he was raised by a Hamas family that taught him to hate Israel (and Jews), and to fear them. John’s journey to come to a better understanding of the Israelis is unique, and a perspective we often don’t hear. Nuance was provided in a conversation that is often desperately missing it. While I don’t agree with everything that Mr. Calvin says, politically or personally, I think his story is one worth sharing. There lies a lesson in it, that even if we are raised to hate, by talking to one another, by engaging, and by human interaction, we can be taught to understand and appreciate one another.

As we watch the campaign to delegitimize Israel rage across America’s college campuses, they all take a familiar tone. Buzzwords are thrown around without any real context provide. We often hear from opponents of Israel that they are an apartheid state, they carry out genocide, and other human rights abuses against the Palestinians. The conversation often appears to be very one sided, and told by people that have no real connection to the Palestinians. This is why I believe John’s story to be so compelling. He grew up in the West Bank, being taught a hateful ideology towards Israel and Jews. His growing up experience taught him to fear them. But through a tragic series of events, John came to a level of understanding that allowed him to view Israelis and the conflict in a different light. He grasps the complexities of the issue from both sides, and has a genuine investment in seeing a peaceful solution that brings about self determination of his people, while protecting Israel’s security. John is nuanced. And nuance is what we are so desperately missing.

The lesson I took away from John Calvin at the JCC is that you can in fact support self determination of both people, and you can humanize the other side. You can learn from and grow from the people you viewed as the opposition. We just have to be willing to talk to one another, speak truthfully, and have an honest, nuanced, dialogue. I hope that the people in the room were equally as moved by my interview with Calvin, and can take his lessons to heart. I am looking forward to helping John share his stories and continue to inspire more people.