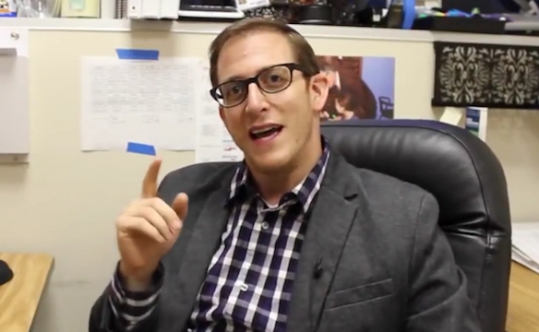 That’s why the head of school at Shalhevet High School, an Orthodox Jewish day school on Fairfax Avenue, penned a nearly 2,000-word editorial for the school’s student newspaper, The Boiling Point, on LGBT acceptance within the Orthodox community.

“The moment has arrived,” he wrote in the Sept. 14 op-ed. “We can no longer sit on the sidelines. As individuals and as a community, we must tackle this issue head-on.”

Titled, “The biggest challenge to ‘emunah’ [faith] of our time,” the editorial calls on Orthodox scholars to reconcile the Torah’s prohibition on homosexual activity with the lived experience of young gay Jews.

“The reconciliation of the Torah’s discussion of homosexuality represents the single most formidable religious challenge for our young people today,” Segal wrote.

In particular, he called on leaders at Yeshiva University (YU), where he received his ordination, to tackle the issue head on.

“I beg the YU roshei yeshiva [heads of school] and the gedolim [luminaries] of our community to take up the discussion now,” he wrote.

In an interview with the student newspaper, Segal urged readers to “stay tuned” for changes at Shalhevet aiming to boost tolerance and acceptance of LGBT students.